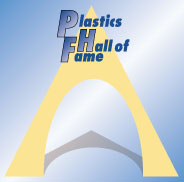 CHICAGO — Every day between the hours of 9 a.m. and 5 p.m., NPE visitors will walk the vast halls of McCormick Place to pay homage to the new machines and watch as they crank out pound after pound of plastic.

But the evening of June 22 is reserved for honoring the people in the industry that made those advances possible.

Eight experts from the plastics industry will be inducted June 22 into the Plastics Hall of Fame at a banquet in the Chicago Hilton.

The class of 2000 includes experts from all major fields of plastics. The inductees include the following:

Eric Baer, founder and first chairman of the department of macromolecular science at Case Western Reserve University in Cleveland, is editor of the Journal of Applied Polymer Science and early editor of the journal, Polymer Engineering and Science. He is also the Henry Herbert Dow Professor of Science and Engineering at CWRU.

Harold Holz has been a part of the industry for more than 40 years and helped processers develop initial uses for polyethylene during his executive tenure at Union Carbide Corp. Holz was also instrumental in the conversion from conventional low density PE to linear low density PE. He now works as a consultant at Marvel Industries Inc., a coumpounder and plastics distributor in Mamaroneck, N.Y.

Gordon B. Lankton is president at Nypro Inc. Lankton first built the company into a global superpower then sold most of his shares to the employees through a employee stock ownership plan in 1998. Nypro also created a state-accredited school that is open to empoyees as well as those from other companies. He is a major financial supporter of the National Plastics Center and Museum.

Guy A. Martinelli, a trade association activist, founded Accolade Plastics & Chemical Associates, a consulting firm that specialiazes in mergers and acquisitions, in 1976. He has also served as president for Sylvan Plastics, Dimensional Pigments Inc. and American Polymers Inc. Martinelli also was the president of the Society of Plastics Engineers in 1964, and he has been a member of SPE since 1950. Other positions he held were with the Plastics Institute of America and Plastics Pioneers Association.

Frank R. Nissel, master of sheet extrusion, is president of Welex Inc., which makes sheet extrusion equipment in Blue Bell, Pa. Among his accomplishments and innovations, Nissel developed an early sheet coextrustion line, invented the Autoflex die and did work on vented extrusion.

Bud Rubens is known as the "Father of Polymeric Foams" because he pioneered the study of organic blowing agents to make foams. Working at Dow Chemical Co., Rubens holds an impressive 58 U.S. patents, 35 of which are for foam technology and high-impact polystyrene.