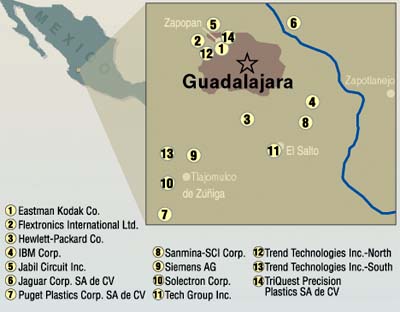 The U.S. economic recovery “will not cross the border soon,” said industry consultant Eduardo de la Tijera of Mexico City. “It may take all of 2002 to see an increase in [Mexican] exports.”

De la Tijera spoke in a presentation for the Global Business Council of the Washington-based Society of the Plastics Industry Inc., which explored the Guadalajara region's business environment in a March 18-20 conference, “Going South: Opportunities in Mexico.”

“Everybody has seen Mexico as a panacea,” an industry veteran observed, “but it has not worked out” for several companies. “It is down to a nickel here and a penny there, and it becomes a nonmargin business.”

Within the state of Jalisco's plastics industry, employment shrank to about 10,000 last year from about 11,000 in 2001, according to the Careintra trade group's plastics section. The number of companies fell to 400 from 469.

Guadalajara and the suburbs of Zapopan, Tlajomulco de ZÃºÃ±iga and El Salto are key industrial sites.

Meanwhile, China is luring the electronics industry away from Mexico.

With production ramping up, Dell Computer Corp. appears to find the Guadalajara climate good — for now.

“We are already in the process of focusing on China and places like that,” said panelist Glen Shrigley, director of tooling sales and technical services with Trend's Tool Tech division. “We have to change rapidly.”

Hewlett-Packard Co., Lucent Technologies Inc. and Motorola Inc. already have shifted work to China from Guadalajara. While their vendors scrambled to diversify, the economic slowdown has hindered efforts.

That has prompted changes at local processors. In January, for instance, Nypro Inc. of Clinton, Mass., committed to take an equity stake in, and manage, TriQuest Precision Plastics SA de CV in Zapopan.

Movement of work to Asia causes concern among plastics executives.

“Taking all of that into consideration doesn't paint a rosy picture for Mexico down the road,” noted attendee Don Madison, president of Marland Mold Inc. in Pittsfield, Mass.

“I will try to be the optimist here,” said panelist Richard Burns, president of LNP Americas, a division of LNP Engineering Plastics Inc. in Exton, Pa. “In the short term, that trend is going to continue. Those in the electronics market eventually may take a wider view about the cost of doing business in Asia.”

“Guadalajara and the Mexican economy are very competitive with Asia Pacific if you take the full cost into account,” he said.

Information-technology shifts to the Asia-Pacific region have “left a large molder base with excess capacity and hungry for business,” Burns said. “This puts a great deal of pressure on custom molders' margins.”

“If a component doesn't come in and your assembly line has to halt, those people clean machines” or do other tasks, Shrigley said. “They don't have an attitude about it.”

The education level there is “somewhere around eighth or ninth grade, and none speak English,” Burns said of the workers. “I was impressed with how many employees were working [and] doing their jobs without supervision. That work ethic, to me, meant a lot.”

“From day one, we set up a shelter company. We have a small core of dedicated employees [and] use the shelter for hiring and human resources.”

Cutting an employee requires payment of at least three months' salary plus 20 days per year of tenure.

“When you hire somebody — as long as this person stays with the company for the 90 days — you have obtained the responsibility for the severance package,” Leal said.

“There is no local pool to pull from,” Shrigley said. “We have our own in-house people down here.”

Even if a toolmaker has the ability, winning customers is a challenge, Gerard said. “Will the customers make the plunge [and] place that first mold [order]?”

“The machine was virtually totaled,” Gerard said. The machine went back to the manufacturer and was rebuilt under insurance coverage. “They put it on a truck, and it was wrecked a second time.” He recommends buying the insurance.

Often in crossing the border, a mover transfers a molding machine between trucks. In reloading, “they just throw some straps over the top of the sheet metal and cinch it down,” Gerard said. The result: “Your panels have 3-inch-crushed insides, like squeezing an empty soda can.”

Shrigley added: “Or they don't cover it properly. It goes through the rainy season [and] is all rusted.”

In one case, Mexican inspectors opened a package of control boards but improperly repackaged them. “They were all damaged,” Shrigley said.

In another, technicians wasted a trip to a plant when customs held up the part.

Documents must be perfect. “If you've miscounted a screw, they hold it up,” Shrigley said. “The paperwork musts be impeccable.”

Attendees of the SPI event talked about Guadalajara.

* “It is amazing how rapidly things change,” said James Meinert, president of Meinert Market Services LLC in Grafton, Wis. “Here [was] a booming market, just a few years ago, and now we are seeing quite a change with the movement toward China for electronics and the printer and computer business.”

* “I think Mexico will become more important as we move into the future,” said Anthony Napoletano, international compound manager with sheet and compound producer Kleerdex Co. of Jupiter, Fla. “China may always have a labor advantage, but Mexico will have a geographic advantage” for principal end users in the United States.

* “Equipment cost is much more competitive” in Mexico and specifically Guadalajara, said Michael Hedberg, Latin America regional sales manager for auxiliary equipment maker ACS Group in Milwaukee. “We have to be much leaner” and still meet processor requirements.