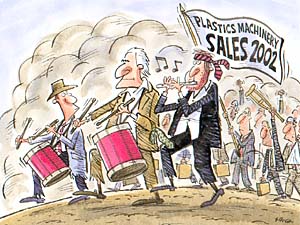 INDIANAPOLIS (Oct. 7, 9 a.m. EDT) — Manufacturers' representatives are the foot soldiers of plastics machinery sales — and the front lines are getting pretty ragged these days, after a two-year period of depressed sales that followed the booming late 1990s.

Reps trolling the aisles at Plastics Encounter Indianapolis, held Sept. 17-19, said the manufacturing recession has forced them to change sales tactics, work longer hours and, in the end, simply survive with less income.

John Forgash, a partner in Premier Plastics Group Ltd., said reps have to be patient and be ready to deal.

“When business is slow customers really spend a lot of time examining your products. They have more time to buy. Now they're more detail-oriented, asking detailed questions, and they're seeing more competitors,” Forgash said.

“Large companies are changing the way they purchase equipment. Purchasing is getting a lot more involved in cutting purchase orders before the final order is made,” Gillig said.

Forgash and Rhody Kraemer, both veteran reps, founded their Columbus, Ind.-based firm in 1998, when machinery sales were robust. According to most industry officials, the good old days ended in the second half of 2000. U.S. shipments of plastics machinery plunged by 40 percent in 2001, according to the Washington-based Society of the Plastics Industry Inc.

Machinery makers responded by laying off workers and slashing production. Jobs of sales reps, who are independent, are shielded from that immediate cost-cutting. Reps offer a valuable service to equipment companies: knowledge of customers in a specific region and a personal touch that has been built up over years of contact with local custom molders, extrusion houses and blow molders. But as self-employed people who live off commissions, they have to pay their phone bills and American Express tabs each month.

Price discounting is prevalent, as sales reps swarm on every customer inquiry, even for small items like a hopper loader. Reps typically have agreements with their machinery makers that they share the pain of discounts. That means a normal 10 percent commission could go down to just a few percent.

“All reps are suffering now,” Forgash said. “The more we discount, the lower our commission.”

Hard times have forced several rep firms to close down, while other reps have taken direct-sales jobs with machinery makers, according to sales officials at Plastics Encounter.

Some things haven't changed. Even when sales are few and far between, Kraemer said, reps keep calling. “When the economy's down, one of the things you have to do is keep that personal contact up with customers,” he said.

Rains said the workday at Quest Plastics Equipment is far different than in the glory days. A few years ago, Quest saw more multiple-machine sales from processors building plants and undertaking major expansions.

Today, he said, he spends more time on one- or two-machine orders, or with inquiries from customers who need special machines to handle new work, such as two-color molding presses.

Rains was at the Indianapolis show to represent exhibitor Wittmann Inc., which makes robots, granulators, water chillers, materials-handling systems and other auxiliary equipment.

Auxiliary equipment is one bright spot. SPI said dollar sales of auxiliaries have increased for three straight quarters, through the second quarter of this year. “Auxiliaries are inexpensive,” Forgash said. “You can add little improvements for a little cost.”

Rains agreed. “It's a short-term way for molders to improve their efficiency, lower their costs, and especially in terms of robots, lower their labor costs.” Automation “is a positive thing that reps have to sell.”

Quest has picked up a new line, magnetic mold-clamping systems from Tecnomagnete Inc. Rains said the magnets give him something new and exciting to sell.

“That's the kind of thing that keeps the rep alive, and keeps them in contact with their customers,” he said.

Used machinery is not as sexy, but Quest and some other rep firms have expanded sales of used equipment.

But Risbridger said there is a “consistent supply” of those late-model used machines because of bankruptcies and machines returned at the end of a lease.

Plastic Asset Solutions conducted one of the largest plastics machinery auctions this year on Sept. 25 at the former Advance Dial Co. plant in Elmhurst, Ill. — including 41 injection presses, 36 robots, 20 granulators and 58 dryers. The machines became available when Nypro Inc. acquired some assets of Advance Dial this summer.

All the used presses on the market force reps to adjust.

“You refocus,” said Kraemer. “When the economy's booming and customers are booming, they're buying capital equipment. But when the economy slows down, you have a lot of surplus machines.”

It's not all gloom and doom, however. One ray of hope came from SPI's second-quarter statistics, which show that machinery may have bottomed out.

A few exhibitors said they plan to buy machines.

One exhibitor, Plastics Molding Co., is bidding on jobs that would require the St. Louis firm to increase the clamping force of its injection molding presses, said Carl Kindermann, sales engineer. Right now PMC tops out at 390 tons. If PMC wins the work, it will buy a press with 700-1,000 tons of clamping force, to run molds with 64 or 72 cavities.