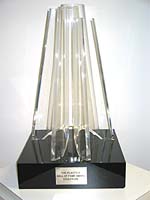 The class has a decidedly international flavor: Before the class of 2005, hall of fame members had to be U.S. citizens, but that is no longer the case.

The Plastics Hall of Fame was established in 1972 to honor significant contributors to the plastics industry. The hall is administered by the Plastics Academy and members are commemorated in an exhibit at the National Plastics Center in Leominster.

New living inductees are elected every three years by a majority vote of the living members, with a provision for posthumous induction in between NPEs.

* Peter F. Bemis, cofounder, executive vice president and secretary of Bemis Manufacturing Co. in Sheboygan Falls, Wis., and president of its Contract Group. The company is known for its innovative processing techniques and its expertise in coinjection and other advanced molding processes. Bemis Manufacturing frequently takes a leading role in industry efforts, including sponsoring the activities of the National Plastics Center's PlastiVan educational program.

* Pak-Wing Chum, who has been with Midland, Mich.-based Dow Chemical Co. for 26 years, most recently as chief scientist of Dow Performance Plastics & Chemicals. Chum is considered a world-recognized expert in the material science of semicrystalline polymers. He may be best known for his work as a key inventor of Insite metallocene-based polyolefin technology. Insite received the 2002 U.S. National Technology medal. Chum grew up in Macau, and he resides in Lake Jackson, Texas.

* Dieter Freitag, whose research and development efforts in polycarbonate materials resulted in more than 430 patents. In 33 years at Bayer AG of Leverkeusen, Germany, he rose to the positions of head of materials research, director of the plastics business R&D group and chair of the Materials Research Committee. He invented a technology for a modified PC that became the basis for the CD industry. After he retired from Bayer in 2000, Freitag joined Triton Systems to work in the field of flame-retardant polymers.

* Jack L. Koenig, who has been a pioneer in spectroscopic methods of polymer characterization, playing a significant role in developing characterization methods to provide fundamental structure-property relationships for polymers used in thermoplastic and thermoset systems. Koenig is a professor emeritus at Case Western Reserve University in Cleveland, in the Department of Macromolecular Science and Engineering.

* Gottfried Mehnert, who designed his first blow molding machine at age 20, has been responsible for a number of technological developments that have resulted in more than 40 patents worldwide. He and his brother Horst founded Bekum Maschinenbau in Berlin in 1958, and they have grown Bekum from a single plant to five plants in four countries on three continents.

* Georg Menges, who was managing director of the world-famous IKV (Institut fur Kunststoffverarbeiting, or Plastics Processing Institute) at the University of Aachen in Germany for 23 years. He grew the small technical training operation to a powerhouse of plastics processing education and research that has influenced many leaders in German and international plastics companies. Menges retired in 1989.

* Robert Schad, who founded Husky Injection Molding Systems Ltd. in Bolton, Ontario, in 1953, built it into one of the world's largest suppliers of injection molding machines. As Husky's president and chief executive officer, Schad fostered a corporate culture that promoted environmental responsibility. He has created the Schad Foundation, which supports solutions to environmental problems, and is active in Earth Rangers, a wildlife, conservation and education organization designed to help young people nurture a lifelong commitment to the environment. Schad retired from Husky in 2005.

* John F. Welch Jr. is his name, but the world's business community knows him as Jack, a chemical engineer for GE Plastics in Pittsfield, Mass., who rose to prominence as CEO of GE. Welch joined GE's Plastics Division in 1960, and ran the division and the development of Noryl. Welch was elected GE's youngest vice president in 1972, and was named chairman and CEO in 1981. He retired in 2001 after growing the company's market value from $13 billion to $400 billion. During his GE career, Welch was supportive of plastics industry initiatives, including the National Plastics Center and Museum, the Society of the Plastics Industry Inc. and NPE.

The Plastics Hall of Fame celebration will take place June 19 in Chicago.