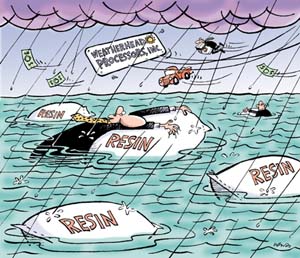 CHICAGO (July 28, 2:40 p.m. EDT) — Everybody in the North American resin market likes to talk about the weather — but is anybody doing anything about it?

Weather got the industry's attention last fall when Hurricanes Katrina and Rita struck the Gulf Coast, damaging several plants and causing major supply disruptions throughout North America. Resin prices skyrocketed as a result, and many processors purchased foreign resin for the first time in order to keep their plants running.

And, ready or not, the 2006 Atlantic hurricane season already is under way. Tropical Storm Alberto made landfall June 10, bringing heavy rain to parts of Florida, North Carolina and Virginia. Alberto was the start of what weather experts predict will be a very active hurricane season.

Researchers with the National Oceanic and Atmospheric Administration in Silver Spring, Md., are expecting 13-16 named storms in the north Atlantic region this year, with 8-10 becoming hurricanes and 4-6 possibly becoming major hurricanes of Category 3 or higher.

Resin producers with plants in or near the hurricane regions have reviewed their readiness plans and made changes where they could. But many executives interviewed recently at NPE 2006 in Chicago still have their fingers crossed.

“Disruption to our operations doesn't mean an impact on our customers,” said Greg Babe, president and chief executive officer of Bayer MaterialScience LLC's North American unit. “We're looking at inventory location, inventory levels and logistic fallback locations. We hope to be better prepared for this one and for future hurricane seasons.”

Bayer's major petrochemical plant in Baytown, Texas, lost production for about a week when the storms hit last fall, prompting officials with Pittsburgh-based BMS to review the firm's supply chain.

“We learned our lessons in 2005,” Babe said. “You think you're prepared, then when it really hits, you see some weaknesses. You have to learn how to use and optimize our network, and you have to know logistics to ensure continuity of supply.”

Heading into the 2006 hurricane season, PET maker DAK Americas Inc. has increased its number of raw material suppliers and broadened its supply base outside of North America. The Charlotte, N.C.-based firm also has increased storage capacity for PET feedstock paraxylene and other raw materials at its plants, said PET business director Tom Sherlock.

Last fall, DAK's PET site in Fayetteville, N.C., was out of production for about 10 days because of raw material shortages.

“You have to do certain things to prepare, or your customers won't have confidence in you,” Sherlock said.

“I'm proud of our staff and how they handled [the hurricane],” Woelfel said. “We've done very assertive planning for this year. We learned the good, the bad and the ugly from last year's experience.”

“We're not building major amounts of polypropylene inventory somewhere in Canada or far away from Texas,” Woelfel added. “But we've taken some production measures and discussed some logistics problems with the railroad. We've looked at alternate routes to customers.”

One of Basell's biggest challenges in the 2005 hurricane season was finding supplies of basic building block chemicals like hydrogen and nitrogen.

“Materials we take for granted were suddenly hard to come by,” Woelfel said. “And you can't make propylene without those two critical materials.”

The impact of the 2005 hurricanes led Dow Chemical Co. to examine production at regional plants in Free-port, Texas, and Plaquemine, La., as well as in Fort Saskatch-e-wan, Alberta.

“We want to have dual sources of raw materials for a lot of our products,” said Howard Ungerleider, commercial vice president of plastic in North America for Dow of Midland, Mich.

Surviving the 2005 storms “took a monumental effort,” added Ungerleider. In Freeport, Dow employees had to remove the computers, causing whole processes to be shut down. Employees then had to place the computers in large plastic bags and put the bags in 55-gallon drums before taking them to the highest point in the control building to guard against flood waters.

Even firms with most of their plants outside the hurricane region, like specialty compounder Teknor Apex Co. of Pawtucket, R.I., have reviewed their supply systems for 2006.

“We backed up our plant in Florida with production in Ohio as a precaution,” said Teknor Vice President Bert Lederer. “We've also looked at some alternate suppliers for our PVC compounding plants to have better balance.”

Last fall, Teknor was fortunate to have a new logistics system in place just before the storms hit. The ensuing market tightness provided an unexpected test for the new system.

“We had made a major investment in a new [enterprise resource planning] system, so we knew what to do,” Lederer said. “We had enough rail cars and we didn't let down a single customer. And experience let us know what we really needed.”

Even with extra preparation effort in 2006, larger issues remain for the U.S. petrochemical industry, which still is largely centered along the Gulf Coast.

“We have to recognize that fundamentally in the U.S., infrastructure remains vulnerable,” Basell's Woelfel said. “Overhead power lines can be taken out by a thunderstorm — it doesn't take a hurricane. As a result, we need to work with multiple [raw material] suppliers at multiple locations.”

“With managed care, you need to find a way to keep health costs down,” Blum said. “You can't guarantee there will be another Katrina, but you don't know that. You have to manage the risk of losing assets or business.”

And although diversifying a raw material supply base may make sense, Blum said it's difficult in some ways.

“If you need an additional 20 million pounds of product, that's a big-cost item to keep in rail cars or silos,” he said. “You probably need to diversify to do so, but that means cutting back on the amount you buy from suppliers one and two to buy from supplier three. You run the risk of damaging relationships.”

At the same time, an evolving global market makes it easier to broaden a supply base.

“Most commodity resins are available from overseas,” Blum said. “It's a global economy now, and it's cheaper to tap into the trade flow at times when your inventories are low.”

“If producers are smart, they'd have deals in place with [resin] traders tight now so they wouldn't lose any business when the market gets tight.”