Plastics as a replacement materialApplications galore 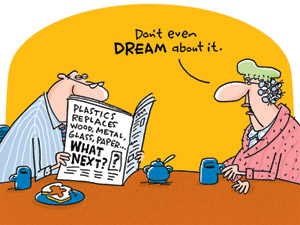 Pipe and peanut butter jars. Tonka trucks and football helmets. What was once made from concrete, glass, metal or leather, is now made from plastics. There is seemingly no end to the list of industries and end markets plastics have touched, if not revolutionized.

Motivation for material replacement has come from all angles — cost, efficiency and customer demand.

In the automotive industry, carmakers have turned to plastics for safety and aesthetic enhancements both in, and outside, the vehicle.

“Take seat belts,” said Rob Krebs, communications director for the Arlington, Va.-based American Chemistry Council's plastics division. “That nylon is one of the biggest life savers and injury preventers, ever.”

Automobiles have been transformed by plastics. Windshields, headlights, bumpers, dashboards, air bags, some exterior body panels and even a portion of the vehicle's infrastructure have been replaced by plastics.

“For every 10 pounds of plastic in a vehicle, it saves something like .014 miles per gallon,” Krebs said. “We're at about 300 pounds per vehicle right now.”

That translates to about 4 miles per gallon in savings.

Metal replacement also has taken place in other motorized vehicles, though in the agricultural equipment market, weight reduction is not among the production goals, said Jay Olson, polymer technology manager in materials engineering for Moline, Ill.-based farm and lawn-care equipment manufacturer Deere & Co.

Citing a heavy focus on industrial design, Olson said John Deere has been using plastics to make their machines since around 1960. Heavy tooling costs convinced Deere officials to use sheet molding compound in place of sheet metal in some applications, he said.

In the 1930s, he said, Deere introduced industrial design into the farm equipment manufacturing industry. Since then, plastics have made their way into several parts of the harvesters and tractors.

Also like the automotive industry, Deere is making all gasoline and diesel tanks from plastics as well as rotomolding separate tanks for handling fertilizers and other chemicals.

“Styling became more of a driver,” Olson said. “Styling is driven by tooling costs. Lower tooling costs to get complex shapes drove us to plastics.”

A similar transition is taking place in the aviation industry.

“Look at the new Dreamliner 787,” Krebs said. “It's going to be 50 percent plastics. It's stronger. It's lighter. There's more room inside. It will have longer ranges and use less fuel. It will revolutionize how we fly.”

The replacement of glass in the bottling industry is perhaps the most easily identifiable trend over the past 20 years.

Where plastics really left its mark in bottling, he said, is in the large-bottle market — the 1-gallon milk jug and the 2-liter bottle.

“Plastic bottles replaced glass,” he said. “Glass had limited use. Plastics came around at the right time. But I don't call it a substitution. I call it making a safe, large-sized beverage bottle possible.”

Krebs touts the energy savings from lighter-weight transportation as well as the preservation properties of plastic food packaging.

“A peanut butter jar is 32 times more weight in glass than it is in plastic. If the ratio [back when glass was still used] was something like 30-40 percent packaging, and 60 percent product — now it's about 5 percent weight in packaging,” Krebs said. “When a truckload of peanut butter jars, mayonnaise, salad dressing is [being delivered], that truckload is so much more efficient.”

Griff tells this story to illustrate the importance of plastics: During a World War II battle in 1940, the Germans had sent bomb-equipped planes to attack a British base, but the British were able to deploy interceptors to prevent the bombers from reaching their target.

German military officials were baffled as to how the British could have known they were coming, concluding that it must have been spies. But no, Griff said.

It was polyethylene insulation in the British radar system that allowed their equipment to see the attack coming.

“Again, plastics made it possible,” he said.

The advent of plastic pipe has allowed for water and gas to be transported in a corrosion-free environment. What began around 1940 continues to displace concrete and metal today.

In the 1950s, sales of plastic pipe reached about 5 million pounds.

“It was getting to be a serious business,” said Stanley Mruck, a former chairman of the Plastics Pipe Institute Inc. in Washington.

It was in the 1950s that concerns arose regarding the potential for harmful chemicals to leach into potable water from plastic pipe. Certification programs arose and the development of stabilizers helped plastic pipe makers prove their products were safe.

“It's important to have good standards and a good reputation,” Mruck said. “That's what really propelled the industry was the establishment of standards.”

The development of flexible pipe is now driving the industry further as cross-linked polyethylene pipe has taken the indoor plumbing and radiant floor heating industries by storm.

Building products in general have been a major area of replacement as various plastics have replaced wood and metal in multiple end markets, including windows and doors, exterior cladding, trim, flooring and outdoor fence, deck and railing.

While acknowledging plastics' role in displacing other materials in several end markets and applications, Griff said he resents looking at the industry only as a replacement product.

“Plastics have created as many markets as they have replaced,” he said. “It's not necessarily substitution, but social and material development.

“Plastics got some places first. Like medical tubing. The medical field burgeoned with the possibilities that plastics made possible.”

“You can throw these things away,” Griff said, though acknowledging environmentalists don't like the nonrecyclable waste. “It pisses people off, but it keeps them alive.”

Questions about the past inevitably led those interviewed to discuss the future.

Eventually, it will be much easier to write down the list of materials plastics have not replaced, than the ones they have.