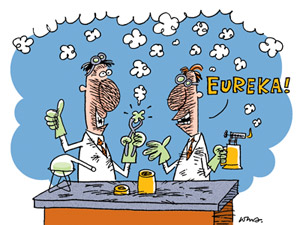 Since the first Nobel Prizes were handed out in 1901, four — in chemistry — have been given to polymer researchers.

* In the 1920s, German chemist Hermann Staudinger demonstrated that polymers are giant, long-chain molecules and not aggregates of small molecules — the prevailing theory at the time. Staudinger received a Nobel Prize in 1953 for his work showing how monomers can be joined in various processes to create polymer chains. That work arguably established him as the founder of polymer science and laid the foundation for the modern plastics industry.

* A German and an Italian chemist shared the prize in 1963 for their contributions in the area of catalysts. Karl Ziegler's early work involved easier synthesis of polyethylene through new catalysts. Giulio Natta's work included the first practical methods to make polypropylene resins as we know them now. Ziegler-Natta catalysts still are used widely today in the polyolefins industry.

* U.S. researcher Paul John Flory, who won in 1974, studied the physical chemistry of large molecules, looking at how fast polymers can be formed and how big they can become under certain conditions. Subjects he tackled that later led to wide practical applications include polymer behavior in solution, theories of elasticity and liquid crystals.

* Alan J. Heeger, Alan G. MacDiarmid and Hideki Shirakawa discovered and developed conductive polymers, winning them a shared Nobel Prize in 2000. In the mid-1970s, they found introducing a dopant, or trace element, to certain polymers like polyacetylene, made them exhibit a range of electrical conductivity. Heeger and MacDiarmid are based in the U.S.; Shirakawa is in Japan.