The next 100 yearsA century of potential awaits 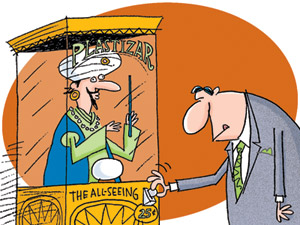 Divining the future entails risk beyond what the average business encounters. While the bulk of this special report deals with history, discussions with industry leaders have yielded glimpses into what may come for the plastics industry during the next 100 years.

A huge intersection of technologies will create new opportunities for the plastics industry in the next century, said Erik Peterson, senior vice president of the nonpartisan Washington-based Center for Strategic and International Studies.

Key areas of technological advances should involve computation, information technology, genomics/biotechnology and nanotechnology, with crossover of the various disciplines.

“We are likely to see changes in material science, especially with nanotechnology,” Peterson said. “Any established area like plastics can stay with or ahead of the curve.”

He characterized the composite airframe for the Boeing 787 aircraft and the “monster” Airbus A380 airliner as mere glimpses of the coming era.

“Plastics is going to be a critical component going forward in a complicated technology and economic environment,” he said.

Peterson said global population might stabilize in the 2070s at about 9.3 billion. The current figure is more than 6.6 billion. He forecast that India at, 1.5 billion, would surpass China, at 1.45 billion, by the middle of this century.

Population stabilization may mean the anticipated drain on resources will not be as significant as thought, Peterson said. At the same time, the likely transition from a fossil-fuel world to a post-fossil-fuel world “could be a huge constraint looking forward.”

Economies in Brazil, Russia, India and China should grow with astonishing speed, and activity in Turkey, South Africa and Argentina also would make large gains, he said. The results: a shift in the global balance of economic production, more export-driven economic strategies and greater educational opportunities in evolving countries.

Peterson acknowledged it is tremendously complicated to look 100 years ahead and cited the maxim: He who lives by a crystal ball ends up eating ground glass.

Established machine suppliers will form partnerships and joint ventures to supply machines in the Asia-Pacific region, and equipment suppliers there will gain technology and manufacturing expertise, he said.

Material manufacturers and suppliers in the Middle East and Asia-Pacific regions will get new supply base and production roles.

Avery predicted China will lead the commercialization of nanomaterials; its government will fund academic and industrial developments.

For successful original equipment manufacturers, the role of design will grow and become integrated with the entire supply chain, he said.

“Productivity will play a critical role and those companies that integrate new product development and commercialization will be the market leaders,” Avery said. “To be cost effective, product design must incorporate materials in the most efficient manner” and consider aesthetics, mechanical performance and recycling requirements.

Efficient processing of multiple materials is critical, he said.

“Currently in the global market, less than 5 percent of the plastic processing capability is multimaterial.”

Europe leads with North America increasing capability and Asia at a beginning stage. “Multimaterial processing plus in-mold assembly in a manufacturing cell will be the manufacturing process of choice by 2050,” Avery said.

Avery retired in 2004 after 34 years with GE Plastics.

Technology is a key

“For people to continue to be competitive, the only way to do it is through technology,” said Stephen Petrakis, president of process cooling equipment supplier Frigel North America Inc. of Lake Zurich, Ill.

Businesses have to find better ways to provide service — faster, stronger and with good price — and the only way is through technology superior to the old ways, Petrakis said.

Firms in Europe, particularly in Germany and Italy, have led many developments, he said. “They spend tremendous amounts of money on research and development” and pursue “what is the next best thing rather than trying to copy what someone else is doing.”

A few large equipment makers and plastics processors will introduce cutting-edge technology in 40, 50 or 60 years, Petrakis said. Perhaps five mega-corporations on the equipment side and others on the processing side might dominate the landscape.

The practice of providing customers with value-added services will increase, and smaller firms will encounter tough market conditions, he added.

For companies comfortable with a single factory and a single address, Petrakis said, “it is becoming harder and harder to compete.”

On the environment, Petrakis said the U.S. government is just starting to catch up with other governments around the world. The plastics industry, including his former employer, the Washington-based Society of the Plastics Industry Inc., is working proactively and educating environmental groups, regulators and legislators on what the industry is doing. Too often, wasteful human behavior is the culprit, he said.

“If you take plastics out of daily life, imagine what would happen in [hospital] operating rooms,” Petrakis said.

Best is yet to come

The bullish Vince Witherup wishes he were entering the plastics industry today rather than when he did four decades ago.

“It is just beginning, and the whole thing is so exciting,” said Witherup, vice president of business development with auxiliary equipment maker Conair Group Inc. in Pittsburgh. “I see the technology side of this thing exploding.”

The concept of a truly global industry becomes more prevalent as time goes on, he said.

Witherup said he is watching “the human creative juices begin to work,” noting how Boeing's 787 airplane would have passengers “scooting around the world in a bunch of plastics.”

He said, “A customer told me, 'Labor is almost free here. Even if it is free, I cannot afford it. I cannot allow for human error.' ”

Auxiliary equipment makers will move into more niches, Witherup said. Of Conair's six major competitors, most are in one or two niches now.

Plastics processors will specialize and focus on niches. “There is always room for little guys,” he said. “We won't have one or two processors.”

According to Witherup, some domestic work that went to low-cost locales is coming back to the United States. “It happens more than we know,” he said.

More foreign customers express interest in the total cost of a machine, rather than the low upfront cost of a foreign-built unit, he said. “They are accepting a higher price for lower overall operating costs,” Witherup said.

“The U.S. is a huge marketplace. It will be a long time before the Chinese have the [U.S.] sales and service networks they need.”

Witherup is a member of SPI's NPE 2009 executive committee and a past chairman of the event.

Low-volume jobs may not require a mold, as advances in rapid prototyping and manufacturing techniques emerge.

Mold makers will build tools with higher complexity for mass volumes using advanced injection molding processes, part-reduction techniques and improvements in in-mold labeling, decorating and assembly, Starkey said. The trend is to put more in the mold to make the part cost less.

Starkey agreed manual assembly is likely to become obsolete in most regions.

Now, a mold may produce both parts — previously molded separately — and an automated system can assemble the components before they emerge from the equipment.

“In the decades ahead, we will see superpower toolmaking companies combine technologies to tool up for programs” with more breadth, Starkey said. “Tooling will continue to be the least-expensive way to produce parts in high volumes.”

Toolmakers will do more in the product-development cycle and will use multiple technologies, Starkey said. That may create opportunity for complex tooling in the Western Hemisphere because a lot of people on the other side of the world will want those same products, he said. “That will give toolmakers in the Western world a leg up in the decades ahead.”

Geographically, global brand owners will continue to expand beyond their home markets in an effort to sell products to emerging populations.

Processors may use additive fabrication to manufacture many plastic parts and products on demand.

“Banks of [three-dimensional] printers will be operating in factories, but the majority will be much closer to the customer,” said Terry Wohlers, principal consultant and president of Wohlers Associates Inc. in Fort Collins, Colo. “Consumers will download datasets and build parts” as needs arise for replacements or new products.

“For example, if you want a new lamp or chair, it will be relatively easy to manufacture it yourself,” he said, citing the avant-garde lighting products and furniture of Materialise.MGX of Leuven, Belgium, as examples.

“Individuals with creative skills will design their own using Web-based design tools, [and] others will modify existing designs, but within limits,” Wohlers said. “The materials will include a wide range of thermoplastics, as well as thermoset materials. Composites will be big, as will materials with nanoparticles that improve strength properties and reduce flammability and smoke emissions.”

“Players will select what they want to build, click a button and enter their credit card details,” Wohlers said. “The model[s] will arrive by mail a couple days later. Others will build the models themselves on their home-based 3-D printer.”

Most of the technical pieces exist today. “Prices for plastic-based 3-D printers will break into three digits [under $1,000] in five to seven years” and to about $250 in 10-15 years, he said.

Materials may be costly.

Sales of polycarbonate should grow globally at about 6-8 percent a year in the coming decades, said Sam Stewart, vice president of sales and marketing for advanced resins in North America for Bayer MaterialScience LLC in Pittsburgh. Differentiation within Bayer and for customers will be important.

“We are finding more opportunities for applications that were never thought of before,” Stewart said. “A lot of the innovation will be up to customers” and may involve Bayer additive chemistry to enhance PC, its cleanliness and its manufacturing processes. Parent firm Bayer AG is based in Leverkusen, Germany.

Areas of interest include antimicrobial and other bio-based materials and processes, optoelectronics, high-performance polymers and nanocomposites. Stewart cited examples of developments and concepts with future market potential.

A Bayer global AutoCreative team is working on technology to incorporate PC and polyurethane components in panoramic roof modules.

“The advantages are weight and cost savings,” with potential improvements of 40 percent vs. glass, Stewart said.

Bayer and automotive concept firm Rinspeed Inc. of Zumikon, Switzerland, pursue ideas for incorporating materials in vehicles and are planning displays for K 2007.

While not fully defined, sustainability is a big issue today and is likely to have an impact on retailers, brand owners and converters, he said.

Brand owners seek to reduce the resin in containers but, for the 2-liter soft drink version, may be reaching limits for the bottle arena, he said. “In other areas, they have not reached limits.”

Eastman has bolstered its internal product design, innovation and related engineering capabilities, spending more on that type of research and development than for R&D for any other business segment.

That investment links with Eastman's efforts to understand the total value chain, work earlier on design aspects and build relationships. “Over the last four years, we have learned how to interact with market more efficiently,” he said. “We talk to Wal-Mart and Home Depot” and brand owners during early stages of product design.

Nelson foresees more uses of extrusion blow molding techniques for packaging shapes and the possibility of a change in polymer morphology creating a new market niche for plastics and enterprising brand owners.

“We will see more applications to use plastics in new ways” including packaging in custom shapes and various shrink-film configurations, he said. “People are willing to spend more on packaging if it improves the buy rate on the shelf.”

Nelson sees plastics as a great solution for the future with sustainability as a key element.