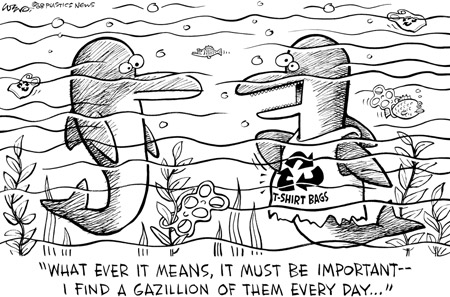 (April 14, 2008) — Plastic bag recycling is growing rapidly, but it's coming up from a level so low, the industry can't really brag about the improvement.

That is a problem other sectors within the plastics industry should be watching — and learning from the bag sector's mistakes.

The American Chemistry Council announced March 25 that the amount of film and plastic bags recycled in the United States in 2006 increased 24 percent from the previous year. But most of that was commercial-grade film like pallet wrap, which is easy to recycle because it is clean and primarily comes from post-commercial, not post-consumer, sources.

There's nothing wrong with that, of course. Pallet wrap has value and should be recycled. But most plastic T-shirt bags, which are under attack in many parts of the world, are not being recycled.

According to our estimate, the plastic shopping bag recycling rate in the United States was just above 2 percent in 2006. Those bags accounted for a little less than 4 percent of the 812 million pounds of film that was recycled. Plastics News came up with that estimate using data from ACC, plastic lumber maker Trex Co. and Heal the Bay, a Santa Monica, Calif.-based environmental group.

In communities where activists, politicians and others are proposing bans and taxes on plastic bags, the industry should be able to fight back with a recycling-oriented message. After all, there's a market for post-consumer T-shirt bags, too. Firms like Trex recycle all they can, typically into durable products that last for years.

But everyone — consumers, retailers, bag makers and resin suppliers — have been lax about pushing for bag recycling. That's putting them in a relatively weak position. Sure, they can argue that T-shirt bags can be recycled. But skeptics are going to say, then why aren't they being recycled in large numbers now? Many bags are reused, and most end up in landfills. But the ones that end up as litter are a big problem, which ties into marine debris issues in California, Hawaii and elsewhere.

On top of that (and some would say this is the real issue, but that's an exaggeration), plastic bags face competition from paper, reusable canvas and now degradable polymers. So if plastic bags are causing environmental problems, there's going to be pressure to try something else.

ACC said the bag recycling rate grew in 2007, and expects it to continue to grow this year, thanks to mandatory in-store recycling programs in California and New York City, and increased recognition of the issue elsewhere. No doubt that's true.

Plastic bags have a strong pro-environment message — they use 70 percent less energy than paper bags, and 63 percent less than compostable plastic. Their greenhouse-gas emissions are 50 percent lower than paper and 77 percent lower than compostable plastic. Plastic bags use less water and generate less solid waste. They're easy to reuse, and there is a recycling infrastructure in place that has a need for more material.

But the problem is that until recently, no one was leading the push to actually recycle more of these bags. The industry needs to learn that it's not enough to just say that a material is recyclable, or to be satisfied recycling polymers in relatively small volumes, concentrating instead on using more virgin resins.

That attitude is stinging the plastic bag sector now. If the focus is on your company's products tomorrow, will you be ready?