Taxes are new tactic in battle over bags 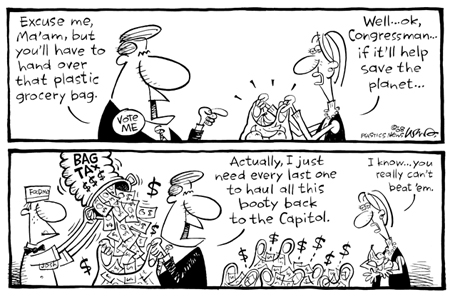 (July 28, 2008) — Get ready for the floodgates to open. Expect to see more plastic bag taxes in the United States, following events in California and Seattle this month that we are reporting this week.

Many readers are probably wondering, what's changed? Haven't bag taxes (and bans) already been popping up across the country in recent months? And that's true. Since Ireland put a tax on plastic bags in 2002, there's been a surge in interest in bag legislation around the world. No surprise there. Every governmental entity wants more tax revenue, and plastic bags are an easy target.

But until recently, the U.S. plastics industry has been pretty successful at stopping bag taxes. We've seen bag taxes proposed in big cities and small towns, all across the country. But most haven't progressed past the talking stage.

Plastic bag manufacturers and their suppliers have been able to argue that plastic bags aren't all that bad. They're at least better than paper alternatives in many ways. And on the critical marine debris and litter issue, bag supporters have proposed recycling programs, which they've promised would help solve the problem.

But now the landscape has changed.

Seattle is preparing to approve a 20 cent tax on plastic bags starting Jan. 1. Los Angeles has adopted a resolution favoring a bag ban that would start July 1, 2010, unless the state adopts a 25 cent plastic bag tax.

A potential key ally in the California debate — the California Grocers Association — favors the bag tax. Why? Well, perhaps its members see bag taxes and bans as inevitable. Plus, the law may give them a cut of the tax revenue. And consumers who want to avoid paying the tax would likely buy durable, reusable bags from the groceries instead.

If bag opponents elsewhere copy the strategies that have been successful in California and Seattle — no doubt they will — you can expect to see more bag taxes adopted around the country in short order.

How did we get into this mess? First, retailers have suffered from a lack of common sense about plastic bag use. When a consumer walks into a store and buys one item — whether it's a greeting card, a bottle of aspirin or a box of cereal — there's no reason to automatically stick it into a plastic bag. Compounding that, Americans are too comfortable in their habit of throwing away used plastics items like grocery bags, and we don't take responsibility for the problems that we create.

Finally, U.S. bag makers and their suppliers took too long to get serious about recycling. A dismal 2 percent recycling rate was apparently too low to stop the ban-the-bag train.

Still, the trend is unsettling. If any municipality can tax or ban a product as common as plastic grocery bags, what's stopping them from taxing other nondurable plastic products? It's a potential nightmare, with legislatures around the country taxing whatever product is deemed locally unpopular and worthy of being replaced by a less-likely-to-be-littered alternative.

We hope the California Legislature comes to its senses before this trend goes too far — although the combination of concern about marine debris and desire for new sources of tax revenue make this appear unlikely. If they do not, a legal challenge is more than appropriate.