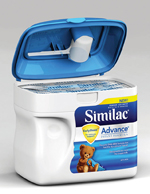 A six-page insert in recent issues of People and a Sept. 24 rollout in New York featuring TV personality Ty Pennington herald a major change in packaging from Abbott Laboratories Inc.

The Abbott Park, Ill., pharmaceuticals company is introducing an all-plastic container in 22-, 23.2- and 34-ounce sizes for six lines of Similac powdered baby formula, replacing the paperboard containers in use for 50 years.

Abbott in August began shipping the new SimplePac containers in the United States and will have them in nationwide distribution by the end of September, spokeswoman Lauren Azzola said in a Sept. 10 e-mail.

According to Azzola, designers at Abbott Nutrition, the company's food-products division, conducted extensive research with more than 1,600 mothers to decide what improvements needed to be made in Similac packaging. The result: a semi-rectangular container with a molded one-hand grip; a hinged lid with a detachable scoop; a wider opening; and custom rounded corners to make scooping out the product easier.

The SimplePac container is multilayer and blow molded of high density polyethylene. The SimplePac cap is made primarily of polypropylene. Azzola said that while the lid is made in a traditional injection molding process, the overcap collar uses two-shot technology to combine the PP collar and a thermoplastic elastomer gasket.

Inside, the SimplePac has a multilayer foil seal containing barrier properties for vitamin protection developed by Abbott.

While the company won't say which converters make the components, a source close to the manufacturing process said his company has signed on to mold about 26 million SimplePac parts annually. Abbott owns and operates filling and sealing equipment for the assembled containers.

According to Abbott, the new packaging comes at no extra cost to retailers, as the formula price per ounce remains the same as in the old cartons.