Australian wine lovers are reaping the benefit of a patented plastic product that preserves the quality of the winemaker's efforts and passion, from the 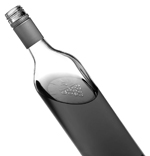 moment the bottle is opened to the last glass.

The Wine Shield, invented by Melbourne-based engineer Barry Rees, is a plastic disc used to shield the wine surface of opened bottles of wine from the effects of oxygen.

The product's outer layer is made from linear low density polyethylene, similar to the resin in the caps on screw-cap wine bottles. The resin is approved for food contact by the U.S. Food and Drug Administration.

Rees said every time wine is poured from a bottle, oxygen enters with the potential of spoiling it. The Wine Shield floats on top of the wine, allowing wine to be poured but preventing oxygen from entering, and keeping the wine's nose and taste “at restaurant quality” for up to five days.

At US$31.50 for a pack of 50, it is significantly cheaper than alternative products, simple and easy to use and does not contaminate or taint the wine, Rees said.

Unlike other wine-preserving tools, it needs only to be inserted into the bottle once, after opening, so the user can “set it and forget it,” Rees said. The shield is inserted in the bottle with an applicator in about five seconds.

Rees, who began work on the Wine Shield in 2004, said it has been extensively tested by wine consultant Pro­- visor Pty. Ltd.'s laboratory in Adelaide, Australia, for scalping, taint and sensory tests for oxidation. The laboratory verified that no difference was found in a freshly opened control bottle after four days, according to Rees.

Tainting occurs when the plastic absorbs environmental compounds from production, storage or transport, and alters the wine's color. Scalping occurs when plastics absorb wine aroma compounds, which can reduce the wine's nose and flavor intensity.

He said Wine Shield compared well with other systems for preserving wine in opened bottles, such as replacing the head-space gas with nitrogen or argon, or partial evacuation of the air in the head space by applying a vacuum.

Wine is normally bottled with a small volume of head-space gas that contains low concentrations of oxygen. Removing the cork or cap mixes that gas with the atmosphere.

Wine Shield, which can be discarded with the bottle, has received an Australian 20-year patent, and has patents pending in 35 other countries.

In Australia, the product is marketed by Melbourne-based Wine Preserva Holdings Pty. Ltd. Wine Shield also is being sold in the United States and New Zealand.