WASHINGTON (Sept. 13, 11:35 a.m. ET) — Double-digit pay increases for executives in 2010 are again raising concern that their pay is growing more out of touch with economic realities.

The concern is driven by one-year incentive payouts after many corporations saw financial performance rebound in 2009 after a couple bad years.

“There is very little attention paid by companies and executives to the economic realities around them — to the fact that the overall economy is struggling, and to the fact that pay for workers hasn't gone up,” said Paul Hodgson, senior research associate in the Portland, Maine, office of New York-based GovernanceMetrics International Inc.

In reality, corporate financial performance is just returning to normal levels, Hodgson said in a recent telephone interview. “With recovering profits, the majority of companies have decided that it is OK to have bonuses and short-term increases of a fairly significant magnitude with very little attention paid to the economic realities around them,” he said. “Executive compensation operates in something of a bubble and it is law unto itself.” 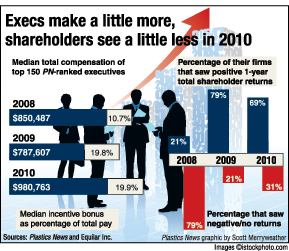 Compensation experts acknowledge, however, that actual 2010 pay numbers do indicate a direct correlation between compensation and performance. There is even consensus that the links are improving.

“Pay design is well thought-out,” said Aaron Boyd, research director for executive compensation research firm Equilar Inc. in Redwood Shores, Calif. “A lot of that started in 2008. Companies are continuing to take seriously the design of their pay plans to make sure it links pay to performance.”

Mallin, who heads the firm's Atlanta office, added, “Total compensation went up around 20 percent and total shareholder return went up 16 percent. So that seems to be roughly right.”

But Hodgson argues that, in general, corporations showed improved financial results for reasons that had little to do with CEO performance. And some median pay rose for other reasons as well.

“Realized compensation rose almost 30 percent at the median largely [because] equity granted in the last couple of years at historically low stock prices began to vest in 2010, and executives were able to reap windfall profits for a return to stock-price normalcy,” Hodgson wrote in a preliminary CEO pay survey for 2010 that he co-authored for GMI. That survey analyzed the compensation of 599 CEOs who had been in their jobs for the two most recent fiscal years.

Regardless of what numbers are used as a benchmark, the hefty increases don't sit well with everyone — not with unemployment hovering around 9 percent, more than 14 million workers out of work and worker wages stagnating.

“I think there is always an edginess around some of these things,” said Jim Aslaksen, senior client partner in the Chicago office of Los Angeles-based Korn/ Ferry International. “When you get a 1 or 2 percent raise, and the CEO gets 50 percent more compensation, that is pretty tough to swallow,” said Aslaksen, who is co-global sector leader for chemicals and industrial markets.

A study released in August by Towers Watson said wages of non-executive workers rose just 2.6 percent annually in 2009 and 2010, after increases that averaged 3.9 annually from 2000-06.

“Even though there is more recognition that executives are paid to make profits and to develop long-term value, when employees are laid off while executives are getting high bonuses, that doesn't look good,” agreed Carol Bowie, head of compensation policy development for proxy advisory and corporate governance firm Institutional Shareholders Services Inc. in Rockville, Md.

“It is illogical that an executive would get a bonus while employees are being laid off,” she said. “The board has the ability to lower payouts, but they are reluctant to use that negative discretion, and so we didn't see boards do that in 2010.”

Bowie does not agree with the rationale used by many board members for not exercising their authority to lower payouts. “Boards feel that it is a hard case for them to make, and many boards felt executives had received lower pay in 2008 and 2009,” she said. “So we found that companies and boards were inclined to ‘compensate' their executive team for that.”

John Ellerman, founding partner of Pay Governance LLC, agreed. “There is often a strong feeling among boards that they want to do something for performance. So if performance is right and targets are met, they feel they want to reward executives,” said Ellerman, who works out of the firm's Dallas office.

Yet that kind of stance can create resentment among employees and the general public.

“It certainly does rankle a lot of people, because they don't see their pay going up 20 percent,” said Equilar's Boyd. “But shareholders were not unhappy with the pay plans,” he said. That was reflected in the approval of more than 98 percent of the executive pay plans in the first-ever non-binding say-on-pay votes this year, Boyd said.

The resentment extends beyond total overall compensation figures, as those numbers include some enormous increases in payouts for improvements in one-year performance.

By comparison, the median annual performance-based bonus for the top 150 plastics executives in PN's ranking rose “only” 26 percent in 2010. That difference is partly because one- year median bonuses for the PN-ranked executives rose nearly 71 percent from 2008-09 compared to just 8.5 percent for S&P 500 executives.

A number of experts attribute companies' improved fiscal results in 2010 not to any magic on the part of the executive team, but to financial performances simply returning to normal levels as well as to soft targets set by corporate boards for compensation plans.

“Boards softened bonus targets at many companies, without the necessary corollary of reducing bonus potential,” Hodgson wrote in the GMI report. “A rebounding economy, however slight the rebound, then led to these softer targets being easily met or exceeded, thus leading to large cash bonuses.”

Echoing that perspective was Dan Pedrotty, investment office director at the AFL-CIO. “The argument that the performance increased and that the payout is for performance ... really rings hollow in this economy,” Pedrotty said. “The reality is that CEOs are so far removed from the average worker on the street that they think their compensation level is OK.

“Workers would kill for a 23 percent increase in pay for one year,” he said. “But instead, they are barely keeping their heads above water. The notion that there is pay for performance [in the executive suite] is ludicrous.”

Indeed, the gap between CEO pay and the median workforce pay has widened from 42-to-1 in 1980 to 343-to-1 in 2010, according to data in AFL-CIO's Executive Paywatch database. That discrepancy reflects both an imbalance of power between boards and executives, and executives and workers, compensation experts say.

“The board compensation committee too often has to rely on budgets and targets set by management,” said Ellerman of Pay Governance.

Also, boards are often reluctant to challenge executives on compensation issues, said Hodgson, who is chief architect of the executive and director compensation databases for Corporate Library, which was acquired by GovernanceMetrics last year.

“Executive pay is policed by board members, some of whom are not very good at asserting themselves with executives and, in particular, with CEOs who are overdominant,” Hodgson said.

“It's inevitable that the gap has increased as most worker wages have stagnated, and some workers haven't even had their salaries restored. And the gap is only going to get wider. There isn't anything on the horizon that I feel will be effective in shrinking that differential in the United States.”

Reda said, “As long as you have the current approach to compensation for executives, the separation between the haves and the have-nots is going to continue to widen.”

Any real change is bound to be slow, Hodgson said.

“The only thing that can speed up changes is when shareholders are putting pressure on [corporations],” Hodgson said. “But real change has to come from within the corporation.”