2011 may be remembered for extreme volatility in polypropylene pricing, or the year a guy named Jon Huntsman ran for president. Or it may just be remembered for Kris Humphries and Kim Kardashian's wedding — and split.

With that much going for it ... a real highlight will have to be the Plastic Globe awards, our annual tongue-in-cheek salute to plastics industry newsmakers.

HOW DOES DETROIT GET THAT REPUTATION? AWARD: To the North American International Auto Show, where thieves made off with a $140,000 BMW being used by executives at the show, and a handful of automakers removed their cars' gearshift knobs because some car admirers in the past had made off them. 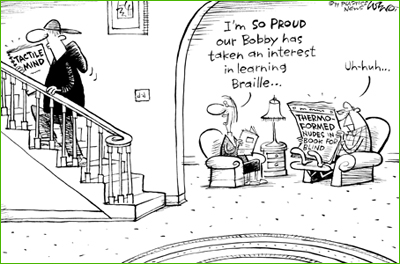 the blind created using thermoformed sheet. One project, which she dubbed Tactile Atelier Bookmark, is a vacuum-formed series of models wearing lingerie. According to AOL News, “The toughest one to mold was the derriere with the lacy thong because she wanted to make sure that it felt like a female's behind, not a man's butt.”

DUMBEST MENTION OF A PLASTIC PRODUCT IN A POP SONG AWARD: To Toby Keith, whose Red Solo Cup hit the country music airwaves in October. Keith called the catchy homage to a thermoformed icon the “stupidest” song he ever recorded. The refrain: “I love you, red Solo cup. I fill you up. Proceed to party. Proceed to party.”

LOST IN TRANSLATION AWARD: To Austrian recycling equipment manufacturer Next Generation Recyclingmaschinen GmbH. The company sent us an email with these instructions: “Attached please find our latest press release for your disposal.”

DID YOU HEAR WHAT I HEARD AWARD: To China's BYD Automotive, which preceded a news conference with a video about environmental friendliness. Unfortu­- nately, its message was lost when its English narration was marred by sentences such as, “If fully charged electric taxi.”

HUMOR ON THE WEB AWARD: To Allied Plastics Co. Inc., a Jacksonville, Fla.-based maker of parts for institutional furniture. The company's website features a slideshow of its products with the caption: “Stunts performed by professional stunt tables on a closed beach. Tables not intended for outdoor use. Do not attempt this at your school or office.”

ON THE PLUS SIDE, IT'S QUITE FILLING AWARD: A weekly newspaper in Hong Kong reported in January that food distributors were selling fake rice in China's Shaanxi province. The “rice” was actually a mixture of potatoes, sweet potatoes and plastic. A food expert was quoted as saying the synthetic resin in the rice is “very harmful to the human body.”

IT'S A SMALL WORLD AFTER ALL AWARD: To Inteva Products LLC Vice President Mary Foster, who has had to handle transportation problems in Europe in the wake of the Iceland volcano, mudslides in Mexico and the earthquake and tsunami in Japan. One day after answering the phone she was heard to have only one question in response to the information she received: “What do you mean we have a supplier in Tunisia?”

FUN WITH CUT AND PASTE AWARD: To Plastopedia.in, a website that describes itself as “the leading plastic portal of the modern age.” The site frequently uses Plastics News stories as unattributed sources for news reports, without our permission. On Oct. 18, we inadvertently included a “cq” note in a story about a Russian company — cq is an old-fashioned editing term meaning the name of the company was checked and was correct. When Plastopedia picked up the story, they kept the “cq” in their report, apparently thinking that was part of the company name!

THE CIRCUS HAS LEFT TOWN AWARD: To the six former Gitto Global executives whose multiyear fraud at the compounding company led to an investigation that finally ended in May, when the last two of them were sentenced.

JUST IN TIME FOR NPE AWARD: To the machinery sector, which continues to rebound after hitting bottom in 2009.

YOU CAN'T FOOL A FOOL ... OK, MAYBE YOU CAN AWARD: To former PolyOne Corp. sales rep Lubos Arnold, who was sentenced earlier this month to 2½ years in jail for embezzling more than $2 million from the compounding firm. Arnold, who was based in the Czech Republic, told authorities he gave most of the money he took from PolyOne to individuals who told Arnold they needed it to help him claim a $12.5 million inheritance. No such inheritance existed.

POD-UNLUCKY AWARD: To Gregory Podlucky, whose soft drink maker Le-Nature's Inc. defrauded investors, lenders and vendors — including plastics machinery companies — out of $684 million. He was sentenced to 20 years in prison. Prosecutors said Podlucky reported corporate 2005 sales of $275 million, when the actual figure was closer to $32 million. (Warning: Don't try this on Plastics News ranking forms).

AULD LANG SYN AWARD: To the dozens of former HPM employees who gathered in March at an auction to sell off everything from the closed-down machinery plant in Mount Gilead, Ohio. They shared memories and some tears. The big surprise: HPM's intellectual property was bought by a China's Guangdong Yizumi Precision Machinery Co. Ltd.

GAS-X AWARD: To the Supreme Court of Gibraltar, of all places, for putting into liquidation all the gas-assisted injection molding patents marketed by Gain Technologies Inc. and the infamous Michael Ladney. The ruling gives the global plastics industry relief from Ladney's lawsuits and threats of lawsuits.