Sales of vinyl windows — along with the overall sector, regardless of material — will steadily increase through 2015, as the industry rebounds from the low-point recession year of 2009, said a trade association report.

Vinyl is by far the largest window material, outpacing wood, aluminum and fiberglass.

“Vinyl continues to take share from wood and aluminum in the residential window market and now holds a 68 percent share overall,” the Ducker report said. “Vinyl gained in the remodel and replacement segment while holding even in new construction” in 2011. 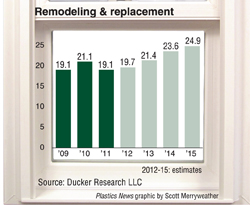 Residential window sales took a hit in 2011 when the government phased out energy-efficiency stimulus tax credits.

Vinyl for new construction should grow by 19.7 percent this year, to 7.9 million units. And the report predicts double-digit annual growth for vinyl windows through 2015, when shipments are expected to top 15 million. But, while upbeat, the report puts the recovery into perspective. That 2015 vinyl number is still below the 2006 level of 16.8 million units.

Also, AAMA and WDMA expect housing starts to continue to recover from the very depressed level of 2009. Even so, total housing starts are not forecast to top 1 million units until 2014 — still well below the peak levels of more than 2 million in 2004 and 2005.

Remodeling, a much bigger segment for vinyl windows, will grow more slowly than new construction. Shipments should reach 19.7 million units in 2012, up 3 percent from 19.1 million in 2011. By 2015, the report predicts vinyl to reach 24.9 million units.

Like new construction, remodeling got hammered by the recession. But activity is expected to pick up later this year, following a strengthening economy and pickup in home sales, according to the Harvard University Joint Center for Housing Studies.

The AAMA/WDMA report said the total window industry collapsed to 38.9 million units in 2009, covering all materials. It recovered in 2010, to 41.6 million, but fell back even further in 2011, to 37.9 million. By contrast, total window shipments were 66.7 million units shipped in 2006, the first year covered by the report.