Median pay for CEOs on the Standard & Poor's 500 was up 6.2 percent in 2011 vs. 2010, according to executive research firm Equilar. That compares with median revenues and median net income at those S&P 500 firms, which increased 8.7 percent and 10.2 percent, respectively, Equilar said.

Also, nearly half — 71 — of the executives in the PN ranking had total pay of $1 million or more in 2011, with 70 percent of those $1 million-plus executives earning between $1 million and $3 million.

Polk — who became CEO of Newell Rubbermaid in July 2011 — headed the list with $18.8 million, thanks to nearly $15 million in stock awards and options he received to compensate him for long-term incentives he forfeited when he left Unilever.

In its proxy filed with the Securities and Exchange Commission, Newell Rubbermaid said Polk earned the $10 million performance-based portion of that $15 million award — as well as 75 percent of the $5 million time-based stock award — by the end of 2011.

Ply Gem CEO Robinette's $10.1 million is somewhat misleading when viewed in the abstract, because it included a $3 million retention bonus negotiated in 2008 that was contingent on his remaining with the company through Sept. 1, 2011 — boosting his 2011 pay more than 40 percent. His compensation also included nearly $5.3 million that is the estimated aggregate grant-date value for stock options granted the past three years — not what those options will ultimately pay out.

(Companies are required to report the grant-date value of options in the summary compensation table of the proxies they file.) 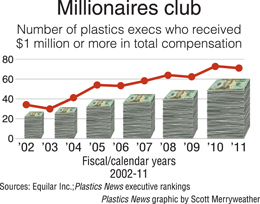 On the other hand, Kramer's $13.2 million earned actually was slated to be $3.6 million higher — a reward for hitting two different financial targets. But the compensation committee at Griffon cut the annual bonus Kramer was scheduled to earn by 51 percent to $3.5 million because of the “disappointing performance of the company's plastics business.”

As with Robinette, the largest portion of Kramer's compensation in 2011 was the $8.7 million estimated aggregate grant-date value for options awarded him the past three years.

The biggest change from 2010 pay for plastics execs was a drop in both the number of bonuses of $1 million or more that were granted for one-year short-term performance and the average size of bonuses overall.

Compared with 2010 when there were 17 non-equity incentive plan (NEIP) payouts of $1 million or more for one-year, short-term performance, there were only 11 in 2011 — with five of those going to executives at Canadian auto supplier Magna.

The average cash value of NEIP payouts for plastics executives was down as well. While the value of annual bonuses for CEOs on the S&P 500 declined 11.1 percent in 2011, the average NEIP bonus for PN's top 150 declined.

The average NEIP bonus for PN-ranked executives — many of them tied to earnings per share, net income, returned on net assets, and return on capital invested measures — was $350,000 in 2011. That NEIP had soared to $856,000 in 2010 because of Magna's $40.7 million mega bonus to outgoing Chairman Frank Stronach that year. Yet, even minus Stronach, the average NEIP bonus in 2011 was about 40 percent lower than in 2010.

That up-and-down movement in plastics industry compensation the last two years shows the success of the adjustments plastics companies are continuing to make to tie pay more closely to performance, some analysts say.

“Plastics companies are often more capital-intensive and do a better job than other industries of tying pay to performance” because of their need to get a return on their assets and capital in order to reinvest in their businesses, said James Reda, founder and managing director of James F. Reda & Associates LLC, an independent compensation consulting firm in New York.

“Capital efficiency measures are particularly important to plastic companies because they make a lot of investments and have to buy a lot of machinery,” Reda said. “It is one of the best measures to drive executive performance because that is something executives can control. If the targets for capital efficiency are met, it means you've done a sound job regardless of whether the company is expanding or contracting.”

Some 12 companies in the PN ranking had a positive one-year total return to shareholders in 2011, while 15 had a negative return. There is no TSR available for companies in ranking that are not publicly held and do not trade equity on a general stock exchange.

PolyOne Chairman, CEO and President Steve Newlin had the second-highest NEIP payout at 4.1 million. (Magna's Walker had the highest, at $6.9 billion.)

While Newlin earned compensation in the 63rd percentile of PolyOne's company's peers, the firm's performance was in the 91st percentile, PolyOne said in its SEC proxy.

“Our recent pay decisions have ... been linked to our performance in terms of key business metrics that drive long-term shareholder value,” the proxy said.

“Even with a slowdown in the global economy that began midyear in 2011 ... our revenue increased 9.2 percent and our diluted earnings per share rose 8.3 percent,” the company said.

PolyOne's overall operating income for 2011 was 33 percent higher than 2010 and working capital as a percentage of sales, excluding the ColorMatrix acquisition, was 9.6 percent.

The overriding reason? “Typically, 60 percent of executive compensation is now delivered in shares that can only be earned if they achieve the targets in three-year incentive plans,” many of which are relative measures, she said. “So executives at companies in the lower half of relative performance aren't going to get high rewards.”

The strong focus today on tying pay to performance is a shift from seven years ago, she said. “Before early 2005, I don't know how many companies really thought about compensation or how it fit in with their strategy and shareholder returns,” Oberholzer Skizas said. “It was just one aspect of what boards of directors did.”

But now, she said, “when companies talk about compensation and benchmarking, they are focusing on where their business needs to be, the relationship between business goals and pay performance, and how to structure a compensation program that drives that,” she said.

And they are developing compensation plans that pay out based on how the firm performs against competitors, Oberholzer Skizas said.

When developing those peer groups, “they need to think about whom they are competing against for talent and capital, which companies have similar strategies and where else their shareholders could put their investment dollars,” she said. “That almost guarantees to an investor that your management team is only going to be paid if the company outperforms similar companies and that your management won't be earning a reward if it doesn't.”

Companies also are spending more time setting specific goals and targets — even though it can be difficult in the current economic climate. “They do a lot more questioning of targets, what target the company is most likely to hit and whether the targets are too conservative or too aggressive,” Oberholzer Skizas said.

“The economy makes it difficult to set targets,” said Mick Thompson, a Chicago-based principal in the human capital consulting business of New York-based Mercer Inc. “But companies are spending a lot of time on their budgets and goal-setting for performance measures in incentive plans to make sure that they are reasonable and that they have enough stretch in them.

“We are seeing tougher targets for the short-term. Annual incentive payouts in 2011 were lower not because of performance, but because targets were tougher for executives to reach.”

Despite the downward slope of total compensation for plastics executives in the PN ranking after huge gains just one year ago, overall 2011 played out as the experts expected.

“There was nothing terribly surprising,” said Aaron Boyd, research director at Equilar. “It was more of a return to what was considered normal … prior to the recession.”

There were still questions about whether there would be an economic recovery when companies set compensation targets for 2010, he said. “So companies set conservative goals, the economy continued to rebound” and compensation numbers overall jumped in 2010 when stock prices rebounded from their lows during the recession.

As a result, “companies set more aggressive goals in 2011 — and did the same for 2012 compensation plans — because CEOs were hitting well above their targeted goals” in 2010, Boyd said. When the 2012 numbers are calculated, he expects pay to be “relatively flat.”

“It might be up a little,” he said. “It will be interesting to see where we are in the economy and where the stock market is at the end of the year.”

Regardless of how pay moves, if it is tied to performance, it will get the approval of shareholders, said Andrew Goldstein, a practice leader for executive compensation in the Chicago office of New York-based Towers Watson.

“Even in companies where pay is high, shareholders will overlook things if the performance is good,” Goldstein said. “Good performance rules the day, and they will overlook things that otherwise might not be overlooked. Shareholders will even tolerate a modest amount of perks for a company that is performing well. But if they're not performing well, those things and anything else negative is going to garner more attention and be under the spotlight.”

Equilar's Boyd agreed: “When shareholders are not getting the returns they wanted, that is when the questions arise.”