AKRON, OHIO (Dec. 14, 2:45 p.m. ET) — Resin distributors continued to spread their wings and fly over the North American plastics market in 2012 — and a number of executives in that field think those same heights can be reached again in 2013.

Regional sales of polypropylene and low density and linear low density polyethylene via distribution each posted sizable gains in the first nine months of 2012, according to the American Chemistry Council in Washington. Sales of PP through distribution soared almost 14 percent to approach 1 billion pounds, while sales of LDPE and LLDPE each were up more than 7 percent.

Those results were tempered somewhat by a 3 percent drop in distribution-related sales of high density PE and a drop of almost 13 percent in polystyrene through distribution, but, overall, distribution officials contacted recently by Plastics News had good things to say about the market and its prospects for 2013. Let's listen in:

Kurt Schuering was understandably upbeat after the business he runs — PolyOne Distribution — rang up nine-month sales of $788 million and operating income of almost $50 million. Those totals were up almost 3 percent and almost 13 percent, respectively, from the first nine months of 2011.

“We're looking at 3-4 percent volume and revenue growth in 2012, and anticipating mid-to-high single-digit rates in 2013 as well,” he said. “We continue to see transportation as strong, and appliance has been good for us this year, partly because of reshoring. A lot of OEMs are bringing manufacturing back to the U.S. because they're concerned about the value chain and quality.” 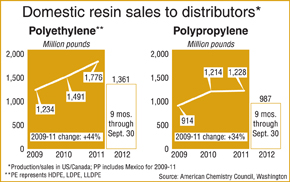 Schuering serves as president of PolyOne Distribution, a unit of PolyOne Corp., the Avon Lake, Ohio-based firm that ranks as North America's largest compounder and one of its largest resin distributors.

“This was our second consecutive year of double-digit growth,” M. Holland president Ed Holland said. “Our growth has been broad-based as our customers have grown. We had a culling-out process between 2008 and 2010 when some companies went out of business. Today, there are stronger companies, and we're reaping the benefits of that.”

Jamplast — which specializes in distribution of engineering resins and biopolymers — saw its volume in pounds grow at least 20 percent, even as lower selling prices created a much smaller gain in dollar sales, owner John Moisson said.

“Drops in resin pricing affect us just like a gas station is affected when gas drops from $4 per gallon to $3,” he said.

A-Top saw “a lot of growth” for sales into blow molding, injection molding and rotomolding applications, according to owner Peter Krippendorf.

“We bring service, and 98 percent of what we sell is prime resin,” he said. “We've seen growth in customers switching from off-grade to prime because it runs better — machines don't lie.”

A high-single-digit growth rate for 2012 is on tap at H. Muehlstein & Co. Inc. in Norwalk, Conn.; while mid-single-digit increases should be seen at Network Polymers Inc. in Akron, Ohio; and Resin Distribution Inc. in Ayer, Mass.

“We're doing decent, but not gangbusters,” RDI Vice President Dave Hazel said. “We've done well in injection molding and blow molding and some film. “Polypropylene [sales] in consumer items has been consistent, and housewares and industrial [PP sales] have been good.”

At Network, sales were strong until September, when they began to fall off, according to purchasing director Denny Sanzone. Sales began to pick up in November as customers' inventories fell to low levels. Sanzone said Network has seen this buying pattern for three consecutive years.

“The economy has been improving,” added another distribution veteran. “This year, our sales into the film market were flat, but injection molding, housewares and industrial were up.”

Sales of engineering resins into the automotive market have been very strong for Clarkston, Mich.-based Chase Plastic Services Inc. in 2012, although owner Kevin Chase said that the auto market has yet to return to the highs it hit in 2007. Chase added that his firm “has done extremely well” in sales into the electrical/electronic, furniture and medical markets for specialty plastics.

The automotive market also has played a big role at Muehlstein. “Auto has been the biggest game this year, domestically,” Skoczen said. “And since the average car on the road is 10 or 11 years old, that's going to continue.”

Muehlstein also is experiencing “a lot of demand” for recycled-resin content in high-end auto applications, where Skoczen said 20-30 percent recycled content can provide a lower cost and piece price. The packaging market “continues to grow and be extremely innovative,” he said. “You can see that when you walk into any supermarket or retail store.”

For M. Holland, sales of PP have increased not only into automotive, but also in consumer goods and housewares, where Ed Holland said customers “want to replace a non-plastic material with something less expensive.” Auto-based sales also have been good at Network, Sanzone said, along with lawn and garden, consumer goods and agricultural uses such as big tractors and farm equipment.

PolyOne has dedicated separate resources to the health-care market and will do the same for transportation and electrical/ electronic in 2013, Schuering said. At Alliance — a distributor of thermoplastic polyurethanes and styrenic elastomers — co-owner Stephane Morin also has seen the trend of manufacturing returning to the U.S. from Asia.

“People are concerned about the long supply chain, and there's a bit of insecurity in Asia,” he said. “They're looking for a reliable supply source.”

Although most distribution execs contacted for this story said they were comfortable with their firms' current line cards and supply partners, some changes were made in 2012 — and more could be on tap for 2013.

During 2012, PolyOne added polyisoprene materials from Kraton Performance Polymers to its line card, specifically for health-care customers, but the firm might stand pat in 2013. “We feel we have the best line card in the industry,” Schuering said. “And we look forward to growing with our existing suppliers.”

Jamplast now carries filled compounds based on nylon, PP, polycarbonate/ABS and acrylic styrene acrylonitrile from Citadel Plastics Holding Inc. Those products “help us fill a void,” Moisson said. “They're a nice complement for us. Our goal is to have a full basket of materials at different price points and applications.”

M. Holland added nylon and polybutylene terephthalate resins from BASF Corp. in 2012, only a year after gaining PC from Bayer MaterialScience and ABS from Styrolution LLC. Muehlstein “is looking to expand its product portfolio” in the next six months, Skoczen said, but he declined to provide details.

Network is “always looking” for new suppliers, Sanzone said, and might want to add in the areas of polyester and engineering resins.

Distributors' efforts to boost their sales staffs — to put more feet on the street — continued in 2012 and should continue down that path in 2013.

PolyOne will add sales, technical and marketing staff in 2013, but Schuering declined to provide details. A-Top has hired three new sales reps in the last two years, while RDI plans to add two or three during 2013.

Network hired two new sales representatives in 2012 and plans to add “at least one more,” in 2013, Sanzone said. Jamplast hopes to hire a new sales rep in 2013 as well. At M. Holland, Sandi Cohen was hired to direct the firm's human resources and communications efforts.

A-Top's Krippendorf said that new hires are needed at the distribution level because resin makers aren't replacing members of their sales force as they retire.

Resin makers “are expecting more from distribution markets,” PolyOne's Schuering said. “We're like an extension of their sales force.”

Jamplast added recycling operations to its 65,000-square-foot warehouse in Mount Vernon, Ind., this year. The addition included three granulators and two shredders. Moisson said the site had grinding equipment already in place when Jamplast purchased it in 2004.

At RDI, 2012 saw the addition of blending machinery at its warehouse in Ayer. Hazel said the firm plans to expand its warehouse in Houston next year, but the size of that expansion hasn't been determined yet. RDI also operates blending services in Houston.

M. Holland is looking to revamp the network of public warehouses it uses by “eliminating old ones that aren't as efficient, and by looking to grow in the West, Northwest or Canada,” Ed Holland said.

Distribution executives are seeing from their customers a mix of optimism about an improving U.S. economy and concern about what the U.S. “fiscal cliff” — potential spending cuts and elimination of tax cuts — could mean to their businesses.

“ ‘Uncertainty' is a word that's been out there for four years,” Kevin Chase said. “A lot of people aren't sure what will happen by January.”

“Many of our customers are concerned about taxes and the cost of health care,” Ed Holland added. “One of the things holding them back is concern about tax leadership.”

Sanzone has seen similar customer concern at Network. “I think part of it was the recent election and part was the tax situation,” he said.

But at Muehlstein, Skoczen said it seems like some customers are seeing things improving. “The mood has been that it's been a tough grind for the last few years, but most customers now see the glass half-full. Not many are dollar-depressed, or half empty.”

Some of Alliance's customers are approaching the market differently, even as they continue to buy resin. “Customers are being more aware of economic dynamics around the world,” Morin said. “They're hedging their bets more. Instead of one big order, they'll make two smaller orders.”

“The people we deal with are cautious,” said Krippendorf at A-Top. “But we'd be scared if they weren't cautious.”

The industry veteran, who wanted to remain anonymous, also pointed out that the North American distribution market appears to have stabilized in recent years because “it's harder for a new guy to enter the market.”

Speed continues to be important. “For distributors, it all boils down to how fast they can sell material and get it into the hands of customers,” said Morin at Alliance. “Customers used to place orders two to three weeks in advance. Now they want it same day or next day.”

Schuering added that PolyOne can offer not only fast service, but also can provide “unbiased solutions.”

And perhaps most importantly, resin makers in 2012 are maintaining and growing the amount of work they do with distributors.

“The trend is still to drive less-than-truckload business to distribution,” Kevin Chase said.

“The long-term trend for distribution is very positive,” added Moisson at Jamplast. “Resin makers are looking to grow with you.”