Just think, 12 months ago Plastics News readers had not heard of "Gangnam Style," Honey Boo Boo or seen anyone lip-synch to "Call Me Maybe."

We hadn't seen an iPhone 5 or any private photos of Kate Middleton. And Fifty Shades of Grey just sounded like a description of the guests at the Plastics Hall of Fame induction.

Sound horrible? 2012 wasn't all bad. Let's take a look back at the highlights with our irreverent annual Plastic Globe awards:

"YEAH, THAT'LL DO IT" AWARD: To the Smart division of Daimler AG, for using comedian Jon Lovitz to introduce the For-Us pickup concept at the 2012 North American International Auto Show. Apparently, Lovitz is a Daimler fan, because immediately after the introduction he was hanging out with his own video camera to shoot footage of Daimler's premiere introduction at the show, the Mercedes SL high-end sports car. The Smart For-Us, after its introduction, had a much smaller crowd across the aisle.

NEXT TIME CHECK THE WEATHER REPORT AWARD: It was obvious that some of the speechwriters who wrote the scripts for new-product introductions at the auto show were working in advance. Executive after executive at the January event made reference to the frigid weather in Detroit. The trouble is, the show took place on mild, sunny days, and the temperature was 20 degrees above normal.

THAT'S NOT A REAL WORD AWARD: To Follow Thru LLC, which sent us a news release in advance of the International Home and Housewares Show referring to a new line of fragrance "scentalizers."

DEMOLITION DERBY AWARD: Jim Press — a former Toyota and Chrysler executive who now is president of international operations for McLarty Automotive Partners, a global auto dealership company, was talking at an Automotive News conference in China about the rapid growth of the auto business in China. "In some cases, the buyer may never have owned or even operated a car before, which is especially interesting when he's buying from a sales representative who may have only recently learned to operate a car. And by the way, did I mention that we also have a chain of stand-alone body shops in China? And they're quite profitable."

THE DANGER OF SOCIAL MEDIA AWARD: In August, a major global plastics machinery company posted a question on its Facebook page: "Does anyone know why you would not mold a toothbrush with PVC (polyvinyl chloride) plastic?" A Facebook friend replied: "PVC is toxic, so it's not the kind of thing you want used for your toothbrush." The machinery company replied: "You are correct. Thanks for your input." Uh, we think there are some vinyl suppliers out there who might disagree.

UNEXPECTED BENEFITS AWARD: To Jae Min, chief designer with Volkswagen Group of America, who said this about the addition of passenger space in the new Passat: "We're hearing a lot of positive comments from people not just about what they can fit in there, but because when they put the kids in the back seat, the kids can no longer kick the back of their seat."

LOOK OUT, SPONGEBOB AWARD: To Prastana Taohim, captain of the cargo ship M/V Gaurav Prem, who was convicted in May of dumping hundreds of plastic pipes into the ocean. The pipe had been used to fumigate a grain shipment with insecticide.

UNINTENDED HEADLINE AWARD: From a Bloomberg story in the June 22 Smartbrief on Sustainability: "Rio aims to build more sustainable slums." What are they trying to do, sustain the slums? Or make them more eco-friendly?

OUCH, IT HURTS AWARD: To German machinery supplier Krones AG, which announced it would take a $100 million pretax hit to settle legal actions stemming from the scheme of a Pennsylvania beverage bottler run by Gregory Podlucky, in what was termed the largest financial fraud in the history of western Pennsylvania. Krones denied knowingly participating in the fraud.

DOES THIS SOUND LIKE YOUR CONFERENCE? AWARD: Overheard by one of our reporters at an event last year in the Midwest: "This has to be planned. No one could have this many boring speakers in a row by sheer coincidence."

MAD MAX AWARD: To Formosa Plastics, which had to hire security guards to keep scrap-metal thieves from plundering its shuttered plant in Illiopolis, Ill. Back in 2011, deputies were called to the plant 31 times, according to a report in the State Journal-Register of Springfield, Ill. Thieves were getting away with as much as 5,000 pounds of copper wire a night, worth as much as $15,000. According to the report, former employees who knew their way around, and where security cameras were located, were among the scavengers.

BEFORE THEIR TIME AWARD: Oliver Schmidt, general manager of the engineering and environmental office at Volkswagen Group of America, noted that VW had introduced diesel and electric options as long ago as the 1980s in the United States: "We are always great at finding ways to bring new technology to the market at a time no one wants the new technology."

LET'S HOPE HE'S WRONG AWARD: From James Morgan, the director of global body exterior at Ford Motor Co.: "One of my engineering managers refers to carbon fiber as the material of the future, and it always will be."

HOW COME THEY DON'T MAKE THE WHOLE PLANE OUT OF THE BLACK BOX MATERIAL? AWARD: To Bayer Material­Science AG, which in November announced it had developed a wallpaper that can help protect buildings from earthquakes. According to the company, the tear-resistant woven fabric, when applied to a wall, holds large areas of masonry together, keeping it stable and giving occupants time to flee the building to safety. 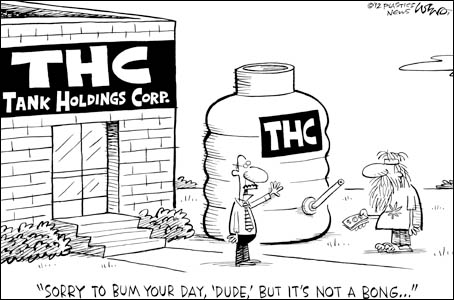 CAN A COUNCILMAN CHANGE HIS MIND? AWARD: To Toronto City Council, which can't seem to settle on a policy on plastic bags. The council started by taking up a proposed 5-cent-per-bag fee to discourage bag usage, but the fee morphed into a planned outright ban. When two industry groups challenged the ban, the prospect of a legal slog convinced council members to give up the ban idea. So now Toronto consumers have the right to expect plastic bags with their purchases. The retailers, however, continue to charge 5 cents per bag, although they are not legally obliged to do so. They pocket the fee, since there is no program whereby the fee goes to fund environmental initiatives that initially made the fee and ban attractive to city council members.

IN CONCLUSION AWARD: To Jon Huntsman Jr., who spoke for well over an hour at an April 1 event marking the 75th anniversary of the Society of the Plastics Industry Inc. and the 50th anniversary of the Plastics Hall of Fame. Apparently he had a lot to get off his chest, after recently dropping out of the race for the Republican presidential nomination.

DON'T MESS WITH MICKEY MOUSE AWARD: To the city of Orlando, Fla., which pulled off the 2012 NPE trade show — the first outside Chicago's McCormick Place since 1971 — and managed to leave attendees with a warm fuzzy feeling that they were actually welcome guests, not just walking wallets.