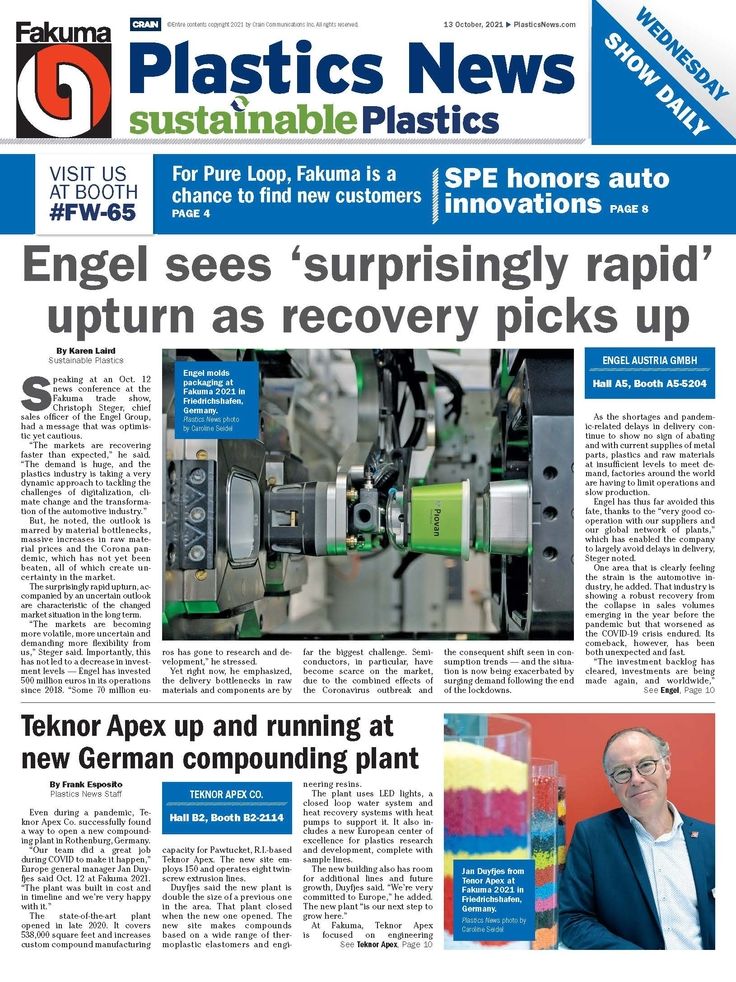 Plastics News reporters are on-site at Fakuma to produce show dailies. Follow along for more coverage at www.plasticsnews.com/fakuma. The show daily issue is available here.

Speaking at an Oct. 12 news conference at the Fakuma trade show, Christoph Steger, chief sales officer of the Engel Group, had a message that was optimistic yet cautious.

"The markets are recovering faster than expected," he said. "The demand is huge, and the plastics industry is taking a very dynamic approach to tackling the challenges of digitalization, climate change and the transformation of the automotive industry."

But, he noted, the outlook is marred by material bottlenecks, massive increases in raw material prices and the Corona pandemic, which has not yet been beaten, all of which create uncertainty in the market.

The surprisingly rapid upturn, accompanied by an uncertain outlook, is characteristic of the changed market situation in the long term.

"The markets are becoming more volatile, more uncertain and demanding more flexibility from us," Steger said. Importantly, this has not led to a decrease in investment levels — Engel has invested 500 million euros ($582 million) in its operations since 2018. "Some 70 million euros ($81 million) has gone to research and development," he stressed.

Yet right now, he emphasized, the delivery bottlenecks in raw materials and components are by far the biggest challenge. Semiconductors, in particular, have become scarce on the market, due to the combined effects of the Coronavirus outbreak and the consequent shift seen in consumption trends — and the situation is now being exacerbated by surging demand following the end of the lockdowns.

As the shortages and pandemic-related delays in delivery continue to show no sign of abating and with current supplies of metal parts, plastics and raw materials at insufficient levels to meet demand, factories around the world are having to limit operations and slow production.

Engel has thus far avoided this fate, thanks to the "very good cooperation with our suppliers and our global network of plants," which has enabled the company to largely avoid delays in delivery, Steger noted.

One area that is clearly feeling the strain is the automotive industry, he added. That industry is showing a robust recovery from the collapse in sales volumes emerging in the year before the pandemic but that worsened as the COVID-19 crisis endured. Its comeback, however, has been both unexpected and fast.

"The investment backlog has cleared, investments are being made again and worldwide," Steger said.

Even so, production lines in some plants have already had to be halted due to the chip shortage, among others, in the United States — and this is having an impact on investments in injection molding technologies. The extent of the impact on what had been the largest of Engel’s five business units will be clearer in coming months.

Today, however, the company's technical molding business unit — comprising sports and leisure articles, house-hold goods and products for the construction and logistics industries — has drawn level with automotive in Engel's revenue distribution, and this is not expected to change anytime soon. Sales in this unit have been fueled both by the boom in demand triggered by the pandemic and the ongoing machinery modernization trend in many companies today.

The three other business units, medical technology, packaging and teletronics, are performing stably. Medical, which saw its revenue spike upward during the pandemic due to the demand for test equipment and diagnostics, is now settling back to a more "normal," albeit steady, growth mainly driven by lifestyle diseases such as diabetes and respiratory disorders.

For the packaging business unit, the focus on sustainable and more circular solutions holds the potential to unlock new opportunities, while the situation in the teletronics division is uneasy.

"The introduction of a new smartphone or tablet is no longer the event it used to be and we no longer see people lining up for the newest models," Steger stressed. "On the other hand, we are witnessing increasing demand for connectors, particularly in Europe due to the rollout of the 5G network and increasing use of cloud and smart home applications."

However, thanks to "at the very least, a 30 percent" year-on-year increase in order intake, the Engel Group expects to close the fiscal year 2021/22 in March with sales close to pre-crisis levels.

"But we have learned not to take things for granted. Much depends on how the next six months play out," he said.

However, Steger said that business rapidly picked up again, first in North America and China, and then Europe as well.

In Western Europe, demand soared to record levels in the first half of 2021, while Eastern Europe is benefiting from, among others, the shortage of skilled workers, which is stoking demand for automation.

The North American markets performed very strongly during first six months, with the company recording growth in all sectors. Reshoring is a major trend in this region, the effects of which are making themselves felt, while increased digitalization is resulting in cost-efficient productivity gains.

In Asia, China continues to be the biggest growth driver. Although here, too, pre-COVID levels have yet to be achieved, the country is showing significant growth compared to fiscal 2020/21. In India, where, aiming to reduce the country's dependence on China, the government has established subsidy programs for reshoring projects, processors are investing in modernization and capacity expansion. "It is definitely a growing market," Steger said. "Not only the market, but also the quality standards are rising at a disproportionate rate."

Elsewhere, including Southeast Asia and Latin America, the economic recovery has yet to take hold, although Engel is optimistic about the outlook for Mexico, Brazil and Colombia in the second half of the year.

Engel is also feeling upbeat about the opportunities Fakuma will bring.

"After having to do without trade fairs for such a long time, the interest in experiencing innovations live is huge," Steger said. "Even if the effects of the pandemic are still preventing some people from traveling, Engel expects important impulses."

E-mobility, sustainability and digitalization are the three major drivers of innovation that are gaining further momentum with the economic upturn, he added. With its main theme of Digital Transformation and a Circular Economy, "Fakuma is happening at exactly the right time."

Digitalization is also an important theme at the Engel booth. While the market is increasingly acceptant of digital solutions, especially since COVID-19 so clearly highlighted the benefits of digital processes, digitalization levels vary tremendously across the industry.

"A wide range of both field-proven and new digital solutions is available for all maturity levels," Steger said.

Digital news being presented at the show, he said, includes among others, the expanded possibilities of the new online support and remote maintenance service developed and tested in cooperation with numerous customers during the Corona pandemic, when on-site service calls were not always possible. Called e-connect.expert view, the new web application now also can make use of video transmission to provide additional information on the status of the machine components and the injection molding machine's environment. It is supported on both smartphones and tablets and allows for the use of augmented reality (AR) glasses, so that both hands are free to work on the machine. The only prerequisite is an internet connection.

In addition, the sim link software launched at K 2019 has also been expanded. Sim link is an interface that allows relevant parameters from a simulation to be integrated into a settings data section for further use on the machine. It also makes it possible for data such as process parameters and measurement results to be imported from the injection molding machine into a simulation program.

"So, at the end of the day, there's no copy-paste operation needed; the data is directly integrated into the machine," Steger said. When it debuted in 2019, the software was available only for Autodesk's Moldflow simulation program. The newest version now also runs with the CADMOULD simulation software from Simcon and can be used on all Engel injection molding machines from the CC200 and CC300 control unit generations.

The company is also introducing a new performance.boost analytics service aimed at helping its customers derive optimum benefit from the data generated during the injection molding process. Trained data scientists at Engel systematically analyze the available data for each specific application, visually process the results and develop concrete recommendations for action. "We invested in new staff for this service," Steger said.

Engel has brought five machines to the show this year. A key exhibit at the booth is the new e-speed size — the e-speed 420 — offering 4,200 kilonewtons of clamping force and targeted at thin-walled applications, which Engel is unveiling at the show. The e-speed injection molding machines with hybrid injection unit and electric clamping unit combine very short cycle times with maximum precision and very high injection speeds of up to 1,200 millimeters per second; they operate with extreme energy efficiency. An energy recovery system absorbs braking energy from the platen movements and returns the stored energy to the motor. The toggle lever is encapsulated to ensure particularly low oil consumption and maximum cleanliness, allowing even the standard versions to meet the strict requirements of the food industry.

The e-speed 420/90 injection molding machine with integrated in-mold labeling is producing ready-to-use margarine tubs from polypropylene with interactive labels using Digimarc watermarking technology in a fully automated injection compression process. The containers, which have a wall thickness of 0.4 mm (including the label), will be removed from the 4+4-cavity stack mold via high-speed, side-entry automation and stacked on a discharge conveyor following camera-based quality control. The partner companies in this exhibit are MCC Verstraete, Plastisud, Campetella, Mevisco and Borealis.

"It's a monomaterial solution," Steger said. Both the tubs and the labels are made from the same PP material, which means they can be shredded together as production waste during manufacturing. The company is processing waste label offcuts as regrind at the stand. An Engel victory 460/80 will be used to produce Pöppelmann tapered closures from an eight-cavity mold.

Plastics News photo by Caroline Seidel
Letter
to the
Editor