To make sure that the neighbors can continue sleeping peacefully despite somebody taking a bath or flushing their toilet in the middle of the night, sound-insulated pipes and pipe fittings are increasingly being installed in new buildings. S-Line is Peštan's response to this trend. The S stands for silent and promises building drainage hardware that performs at less than 12 decibels. The pipe system specialist based in Aranjelovac, Serbia, 75 kilometers south of Belgrade, modernized its injection molding production for the market launch of the innovative product line two years ago. The new tie-bar-less ENGEL victory machines make it possible to meet the increased precision requirements while maintaining low unit costs.

"We are the largest production plant for pipe and pipe fittings in Europe," proudly says Miodrag Petkovic on a tour of the production facility. He manages the company founded by his father 30 years ago, which in itself is a good customer of the products they produce. The new administration building has almost been completed and the production floors are also being extended. The location employs more than 1000 staff.

Injection molding and extrusion are the two major production processes that produce parts with a total material weight of 65,000 tons per year. After completing the plant expansion, the capacity will grow to 100,000 tons per year. "We are responding to rising demand, also from abroad," says Petkovic. Seventy percent is exported, primarily to Europe, but also to the USA and Asia. Thirty percent remains in the countries of former Yugoslavia, where Peštan is a leading brand.

Focus on operating costs and availability

Innovative products, such as low-noise pipes and pipe fittings, are among the growth drivers. The S-Line range currently accounts for around eight percent of the business. "This business will grow to at least thirty percent over the next five years," says Petkovic. "We have invested heavily in sound insulation," as Milan Nikolić, Head of Strategic Development at Peštan, emphasizes. There is a lot of expertise in the material – it's a mineral-filled polypropylene – and also in the geometry of the fittings. "The material and geometry place significantly higher demands on the injection molding process than conventional pipe fittings," says Nikolić explaining why the company also invested in machinery.

18 ENGEL victory machines are available at the plant for the production of sophisticated molded parts.

The majority of the more than 100 injection molding machines at the location still come from a Chinese supplier. "The investment costs were the deciding factor for us for a long time," says Petkovic. "But the criteria have changed. Operating costs and machine availability are more in focus today." S-line pipe fittings and other sophisticated products are now in production on 18 new ENGEL victory machines with a clamping force range from 2600 to 5000 kN, some equipped with integrated ENGEL viper linear robots.

Ultimately, tie-bar-less technology tipped the decision in ENGEL's favor. "We had our eye on tie-bar-less machines for a long time. On top of this, we wanted the best possible technology," says Petkovic. It was also clear that the higher capital investment would have to pay off in the end. As expected, this is mainly due to the far faster setup processes. The bottom line shows that other properties of the ENGEL victory machines also reduce unit costs.

If the cavities are in the area of the mold mounting platens, the core-pull mechanism can project beyond the edge of the platen.

Setup times cut in half

The huge mold inventory is particularly impressive during the tour of the plant in Aranjelovac. 7000 molds are in active use. With a minimum run time of two days, specified by plant planning for large molds, at least 15 set-ups are carried out per week. A look at the running machines clearly shows why mold set-up is an essential factor in pipe fitting production. Pipe fitting molds cannot do without core-pulls, and often these protrude laterally beyond the mold. "Pipe fitting molds are extremely large and complex compared to the part surface to be created," says Franz Pressl, Product Manager for victory machines at ENGEL's headquarters in Austria. "Injection molding machines with a tie-bar-less clamping unit are perfectly designed for this." The molds can be loaded into the barrier-free mold area in one piece and mounted directly from the side of the machine. "We don't need more than an hour and a half to set up even the most complex molds," says Nikolić, pointing out the benefits. "Mounting the same mold on a machine with tie bars would take three hours, because we first have to dismantle the core-pulls, and every minute of downtime costs us money. With ENGEL machines, we achieve utilization times of over 90 percent. That's a very high value that directly affects the unit cost."

Even with complex molds, the clamping force required for the molding process and not the mold volume determines the size of the injection molding machine used.

The significantly smaller machines are another efficiency factor. Since the core-pulls cannot always extend between the tie bars, many pipe fitting molds run on larger tonnage machines than are truly required for the process. This is different with tie-bar-less machines. "Only the cavities have to be in the area of the mold mounting platens," as Pressl explains. "But the mold edge and the mechanical system can protrude beyond the platens." This means that large molds fit on comparatively small injection molding machines that require less energy, coolant and floor space. "During the purchasing process, it is usual to compare machines with the same clamping force," Nikolić knows. "We have now explained to our procurement department that this does not hold true for the victory machines. The basis of comparison for a 300 ton tie-bar-less machine is an 800 ton machine with tie bars."

Before deciding on ENGEL and tie-bar-less technology, Peštan visited customers using ENGEL victory machines, and, with the support of Neofyton, ENGEL's sales partner in Serbia, took a mold for testing to another ENGEL customer. "We received very good advice from ENGEL and Neofyton right from the start," reports Petkovic. "The victory machines were designed with a special mixing head specifically for our special compound." A further central key topic in the planning of the system was precise injection control, as S-Line pipe fittings can quickly exhibit light spots at the injection point. "The victory machines help us to achieve very high repeatability, which allows us to operate at faster speeds," as Nikolić emphasizes. "Additionally, we have been able to reduce the use of raw materials by five percent because of our plasticizing precision."

Parallel to modernizing the machinery, Peštan launched an extensive Lean and World Class Manufacturing (WCM) project. The investment in ENGEL machines set an important, initial milestone on the way to WCM. "When customers visit us, they are always impressed by our production," says Petkovic. "ENGEL is also a respected brand among our customers."

Partners Peštan and ENGEL also have some plans for the future. "ENGEL not only has a huge amount of experience in injection molding, but also very good insights into future trends," says Nikolić. He has his sights firmly set on process integration and multi-component injection molding. For example, seals will be injected directly into the fitting thread in two-component injection molding in future, immediately before the barcode is automatically printed. Tie-bar-less victory machines have already been designated for this task. After all, multi-component processes and the integration of upstream and downstream steps can also be implemented far more easily and efficiently thanks to free access to the mold area.

From right to left: Milan Nikolić and Miodrag Petkovic from Peštan, Franz Pressl from ENGEL AUSTRIA and Dusan Bunovic from Neofyton.

One thing in common: 30 years

The same year Peštan was founded, 1989, ENGEL introduced the world's first injection molding machine with an accessible, tie-bar-less clamping unit. The industry showed high interest soon and the tie-bar-less machine became the predominant design at ENGEL’s main production plant in Schwertberg, Austria. Because of its victorious triumph, it was given the name victory. ENGEL now offers three tie-bar-less machine series, the servo-hydraulic victory, the e-victory with an electric injection unit and the all-electric e-motion TL. All of them combine excellent cost-effectiveness and efficiency with maximum resource protection. 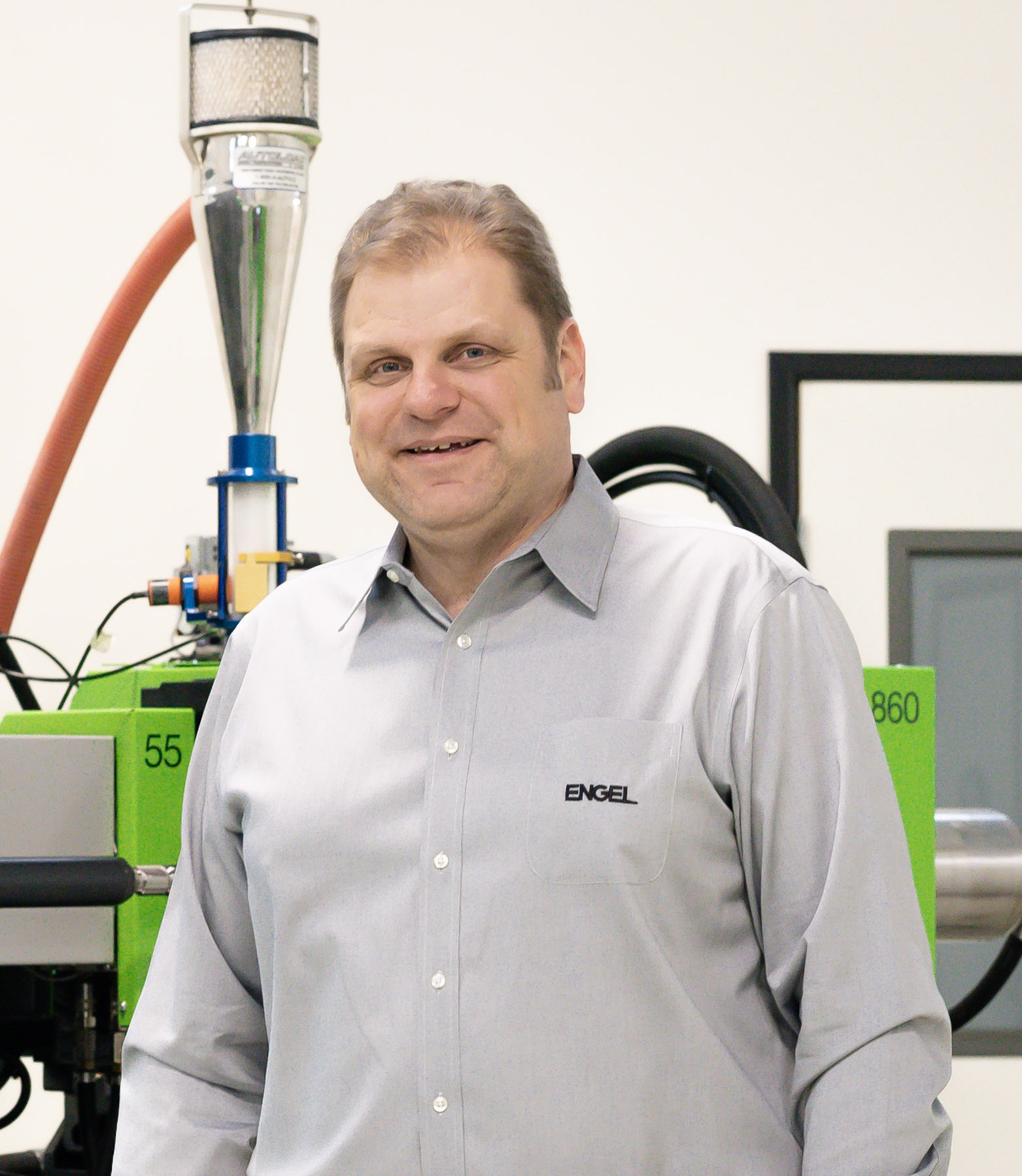